► See the Temple of Athena Nike

► Visit the Tomb of Agamemnon

► Experience where the Olympic Games began

Arrive in Athens and enjoy an optional evening city tour to see the illuminated Acropolis before dinner in a Greek taverna with traditional folk music.

In the morning take a more immersive tour to see the Panathenaic stadium, the new Acropolis Museum as well as architectural masterpieces of the Golden Age including The Propylaea, the Temple of Athena Nike, the Erechtheion and the monument that “puts order in the mind”, the Parthenon.

On Day Three, leave by the coastal road to the Corinth Canal and visit the Theatre of Epidaurus before arriving at Nafplion and on to Mycenae to visit the Archaeological Site and the Tomb of Agamemnon.

Onto Olympia through Central Peloponnese, passing the towns of Tripolis and Megalopolis. Arrive at Olympia, cradle of the ancient Olympic Games, and stop overnight to be refreshed in the morning for the breathtaking moment of entering the site.

Walk under a stone arch and into the spectacular stadium, a large rectangular stone sports field surrounded by forested hills and grassy banks where the 40,000 spectators would have sat in anticipation. The stones depicting the start and finishing lines are still there to be used by today’s visitors who, young and old, stage their own mini-games.

Continue onto Olympia where you'll spent the night.

Get a sense of the glory of Olympia today as you walk down the hill into the site, once a grand Olympic sanctuary built to honour the gods. The gymnasiums, training schools, accommodation blocks, administration buildings, treasuries, storehouses, priests’ houses and temples were built in stone and marble, no expense spared. The spectacular centrepiece is still the Temple to Zeus. When it was built in the 5th century BC it was more than 200 ft long and almost 70 ft high and contained a 40ft tall statue to Zeus, one of the Seven Wonders of the Ancient World. One of the many imposing columns that supported the building has been reconstructed to provide a sense of scale.

After an exhilarating visit, it’s time to return to 21st century Athens where you'll spend the night.

Day 5 - Transfer to airport or extend your stay

Today's the final day of your tour so why not extend your stay in Greece with a visit to one of our islands. Airport departure transfer is included if required.

Meals: As mentioned throughout the itinerary. 4 breakfasts and 1 dinner.

Included: Arrival and departure meet and greet transfers, meals (stated in the itinerary) and entrance fees in the archaeological sites and museums (order of visits are subject to change).

Not Included: Drinks during meals, meals (unless stated in the itinerary) optional excursions and tips.

*Price based on April 2022 departure, 3 star accommodation option and from London Stansted  (other regional airports available).

To find out more and receive a quotation on your selected touring holiday choices please contact us on: 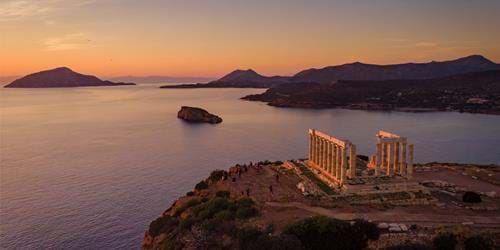 Back to the touring holidays page