Book it!  Our shout-out for Olympic Holidays’ customers to share their favourite holiday reads certainly demonstrates that many you love a good book to ‘get into’ while on holiday – your recommendations have been flooding in.

Mandy Baggot and Mary Renault are popular choices but the overall favourite novel, by long shot, is Victoria Hislop’s The Island. We contacted Victoria to let her know!

Victoria was delighted to hear the news from Olympic Holidays and said: “I was thrilled to find out that The Island was so popular among readers! I wrote it 15 years ago and my attachment to Greece has grown almost by the day.

“Since publication of The Island, I have bought a house in Crete, learned the language and even become an Honorary Citizen of the closest town to Spinalonga, Agios Nikolaos.

“I spend a few months a year in Greece (on the mainland as well as in Crete) and I absolutely love it there.

“My new novel, Those Who Are Loved, which covers the period from the Second World War to the present is largely set in Athens and needed many months of research - but I was more than happy to be there.

“I always encourage anyone who is going to visit the islands to spend some time in the capital city - it is a really fascinating place and steeped not just in ancient history but modern, too.

“If someone made me choose between mainland and islands I would be torn! I love them both."

Congratulations to our 10 winners who submitted recommendations for their favourite book.  E​ach will receive a copy of one of Beryl Darby’s books.

Those Summer Nights by Mandy Baggot

I just wanted to tell you about my favourite holiday reads, technically it’s an author, Mandy Baggot, who writes wonderful books about Corfu. If I had to pick a favourite it would be Those Summer Nights but I do love all of her books. It is about a brother and sister who on a snap decision end up moving to the Greek island after Harry buys a run-down Greek restaurant. His sister Imogen agrees to go with him to help him set it up. While there she meets a man who is intent on taking over the restaurant and hopes they fail in their venture, but eventually Imogen gets to know him properly and they fall for each other. The way Mandy writes just makes you feel like you are there with the crystal clear waters and describing an array of wonderful Greek dishes. They are the perfect, easy going, feel-good holiday reads! Her new book has just been released which I’ve just read in while in lockdown, it’s made me miss the Greek islands desperately! But it got me motivated to try doing my own attempts at Greek recipes and I made Beef Stifado after hearing it described so wonderfully! She really has a way of transporting you to Corfu when in reality you are in your own back garden! Which has been an absolute (albeit imaginary) godsend just lately!

The Island by Victoria Hislop

No question, it has to be The Island by Victoria Hislop. Absolutely fabulous read based of course on the famous lepers’ island off the coast of Crete. You are transported to life as it was when the leprosy sufferers from all over Greece were sent to live in a totally separate colony on Spinalonga. I read this while on holiday on Crete and was lucky enough to go on a tour of the island which brought it all to life, as the ruins of the buildings are still there. What an experience. This for me is the best holiday read ever!

The Reckoning by John Grisham

I’d love to recommend The Reckoning by John Grisham as one of my favourite holiday reads so far. While Grisham’s books are generally quite hard going legal thrillers, this book tells the tale of a traditional well-respected farming family in rural Mississippi unravelling and understanding the reasons why the head of the family returned from the war and shot the local preacher, then refused to comment on his actions for many years afterwards. The story is fascinating and informative, with unexpected plot twists and a gripping ending, so enthralling I could have forgotten where I was, had I not been in Greece! I even have a photo of the book while I was reading it on the beach at the beautiful St Paul’s Bay, Lindos.

The King Must Die by Mary Renault

On my first Greek island holiday to Crete, in 1981, I read The King Must Die by Mary Renault - a re-telling of the Theseus story. I can recommend it for any holiday!

Spoiled for choice really. For a great stand alone book with a Greek connection you obviously can't beat either Captain Corelli's Mandolin by Louis de Bernieres or The Island by Victoria Hislop. For a series, or boxset, read try the Mary Russell series from Laurie R King. Or the Giodano Bruno series from SJ Parris. Both totally absorbing depending on whether you like early 20th century or mid-16th. Whichever book or author you choose, lose yourself and enjoy.

The Persian Boy by Mary Renault

I love a book called The Persian Boy by Mary Renault. It is such a classic written in 1972. It is about Alexander the Great and his relationship with a young boy who ended up being his servant after the defeat of the Persian King. It is a book about loyalty, history and a great love.

The Island by Victoria Hislop

My favourite holiday read last year was The Island by Victoria Hislop, which I read by the pool in Crete. It really made some of the history of the island come alive for me.

Martina’s novels are quite violent but most of that is left to your imagination. They also have a down-to-earth feel to them as they are set close to home for me in Essex. I have read four or five of these while on holiday, mainly in Paphos, Cyprus.

I’d like to recommend anything by Mandy Baggot as a perfect holiday read! Her books are fantastic, so easy to get lost in and hard to put down. Lots are set in Greece – Corfu to be exact, and the way she writes transports you right there. You can almost smell the sea, Greek food and ouzo.

City of Bohane by Kevin Barry

I would like to recommend City of Bohane by Kevin Barry – a “gangster” story set in a futuristic fictional West of Ireland conurbation ... It’s stylish, violent, witty, cliff-hanging and full of the “patois”. 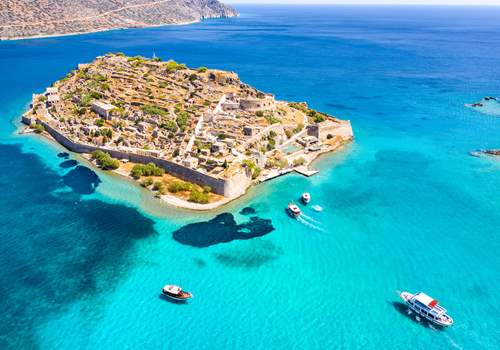 Elounda, a snapshot of Cretan perfection

Your Resort Guide to Beautiful Zante

A guide to Mainland Greece
⇧