Things to do in Fuerteventura 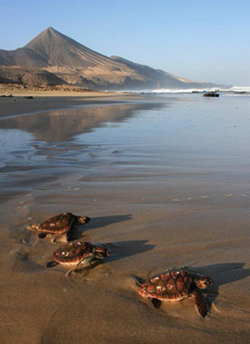 Morro Jable is a small town very near the southernmost tip of Fuerteventura. It has a long, wide and beautiful white sand beach and it is has an unusual sea turtle nursery that is at the centre of a conservation project. It needs tourists’ help.

Loggerhead turtles, called carettas, were once fairly common in the Canary Island. But in recent decades their numbers have dwindled until it is feared they have become a threatened species. Pollution and plastic are among the reasons.

A project launched in Fuerteventura in 2006 to reintroduce the turtles does appear to be working. The eggs are shipped in from the Cape Verde Islands and buried in the remote sandy beach of Cofete on the west coast in the stunning natural park of the Jandia peninsula.

Morro Jable is a few kilometres away on the south coast. So what has it got to do with this?

It takes about 60 sunny days for the eggs to incubate and, usually, the young hurry into the sea and vanish. Most don’t survive their first year.  Females that do live, return to the place where they hatched to lay their own eggs.

What happens in Fuerteventura is that the newly hatched baby turtles are picked up and taken to a nursery in Morro Jable harbour where they are looked after in sea water tanks until they are big and strong enough to survive in the wild.  Then they are released.

There is no fee for visitors who pop in to the Turtle Nursery to get a close-up look at these fantastic animals, but the project depends on donations to keep going.  Injured turtles being nursed back to health can sometimes be seen too.

Apart from its beaches, the lively town of Morro Jable also has a busy port, lots of restaurants, cafes and hotels, a lighthouse and the skeleton of a large sperm whale. The skeleton is on display in a grassy area near the lighthouse as part of a free-for-all museum initiative by the island’s governing body.