Island hopping in the Sporades

A romantic lustre adds sparkle to the marvellous Sporades Islands and legend has it that one island was created by the love child of gods. Now two islands are the focus of one of the 21st century’s most successful romantic movies, Mamma Mia!

As your plane approaches Skiathos you can see why these emerald islands were chosen as the fantastic setting for the film. Magnificent beaches are lapped by clear blue seas and the scenery is amazing.

By visiting three different islands you get the special Sporades experience in one unforgettable holiday. Life on these friendly islands feels like make-believe.

Your journey starts in Skiathos

Gorgeous Skiathos Town, the main town, has shady tavernas on a busy waterfront. But don’t be fooled – the narrow streets of the bustling old town are crammed with shops and lively cafes and bars. You can rock the night away - if you want to.

You can also climb Venetian castles, stroll through forests to discover quiet sandy beaches and even take a rescued dog for a walk. Buses run five times an hour through peak season, linking resorts between Skiathos Town and Koukounaries, the best-known beach that is a crescent of golden sand fringed with pine trees.

Larger than Skiathos but not as busy. Look out for dolphins before you sail into a harbour that is backed by a stunning hillside covered in white houses with terracotta roofs.

Tree-filled Skopelos has forests, orchards thick with almonds and plums and the delightful scent of wild herbs is everywhere. Keep an eye out for eagles, buzzards and owls and some of 360 or so churches and chapels.

Several beaches can be reached easily by bus or hired vehicles and many more beaches are waiting to be found in bays and coves.

A gem for those wanting to get away from it all.  You feel the sense of calm as you sail into elegant Patitiri, the small town and main port.

Some beaches have bright white pebbles or sand creating a vivid contrast with the turquoise sea.  Many beaches are surrounded by pine forests that cover much of the island.

Alonissos is in Europe’s largest marine park which protects monk seals, dolphins and numerous other animals and plants. It has a rescue centre for baby seals.  Try to fit in a boat trip around the park before returning to Skiathos.

You can visit the Skopelos chapel where the wedding was filmed for the first Mamma Mia! movie – if you’re fit enough.  Agios Ioannis Kastri (Saint John on the Castle) is perched on top of a 300 ft high rock jutting into the Aegean Sea. More than 100 steps complete the climb and the fabulous view makes the effort worthwhile. 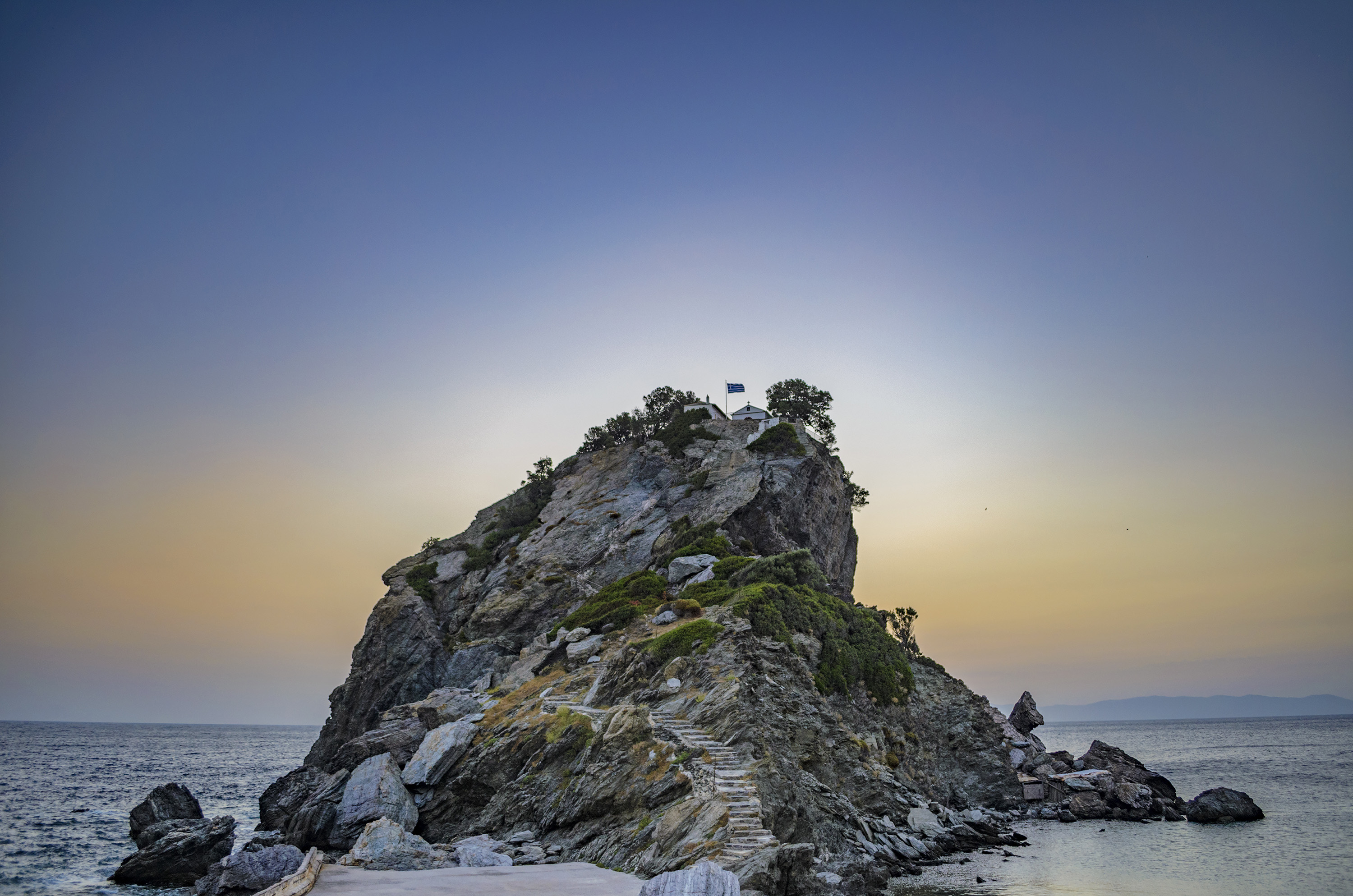 Probably the most famous Mamma Mia! beach on Skopelos is Kastani where the film’s energetic dance routine takes place on a jetty. It’s a lovely beach – but the jetty was only there for the film.

Another climb takes you to the top of the bell tower of the Agios Nikolaos church in Skiathos Town, where bride-to-be Sophie wrote letters to trace her father.  Take a camera – the views are worth it.  The harbour at the bottom of the hill is where the three possible "dads” meet. 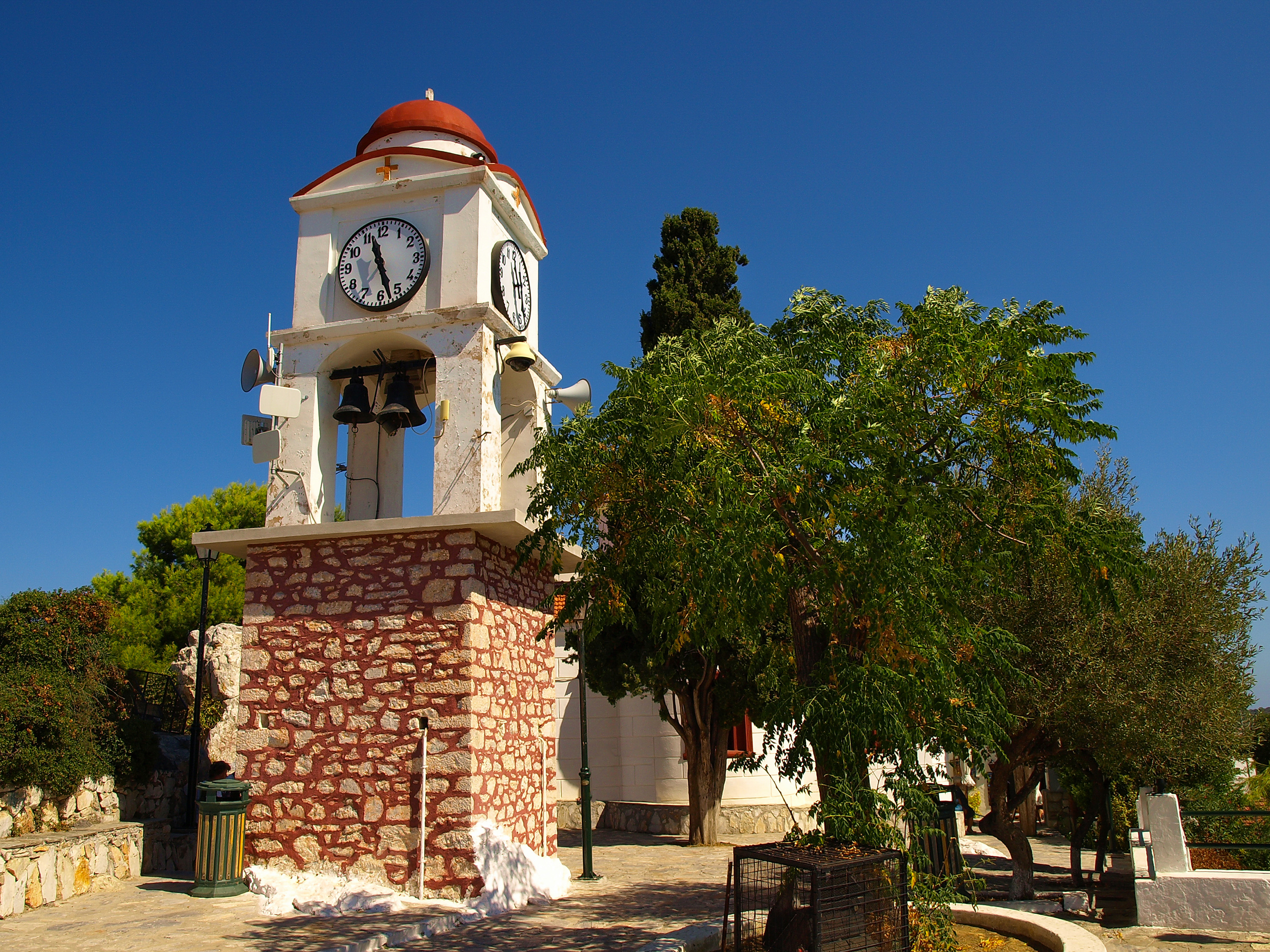 If you fancy seeing a movie in Skiathos Town try the Attikon outdoor cinema which shows films in English. It is open throughout the summer season until mid-September and, of course, it frequently shows the Mamma Mia! films.

Tourists flock to take stray dogs walkies in Skiathos. The island’s dog shelter opens for visitors to walk or pet a dog every morning.  A stray dog crisis prompted the centre’s opening in 1995. Visitors’ donations help keep it running. Find out more on the Skiathos Dog Shelter Facebook page.

Staphylos Beach and the Mythical Beginning of Time

A Skopelos beach called Staphylos provides an amazing link to the mythical beginning of time. Legend says Skopelos was created by Staphylus, a grandson of Zeus, the father of the gods. His name means grape cluster and Skopelos was once famous for its wine. Excavations in the Staphylos area revealed a royal tomb.

Bourtzi and the Venetian Remains

The lovely Bourtzi area of Skiathos Town is the leafy setting for the remains of a Venetian fortress, cafes, walks and seating areas where you can watch the planes swoop low across the sea before landing at the airport. Fascinating viewing. 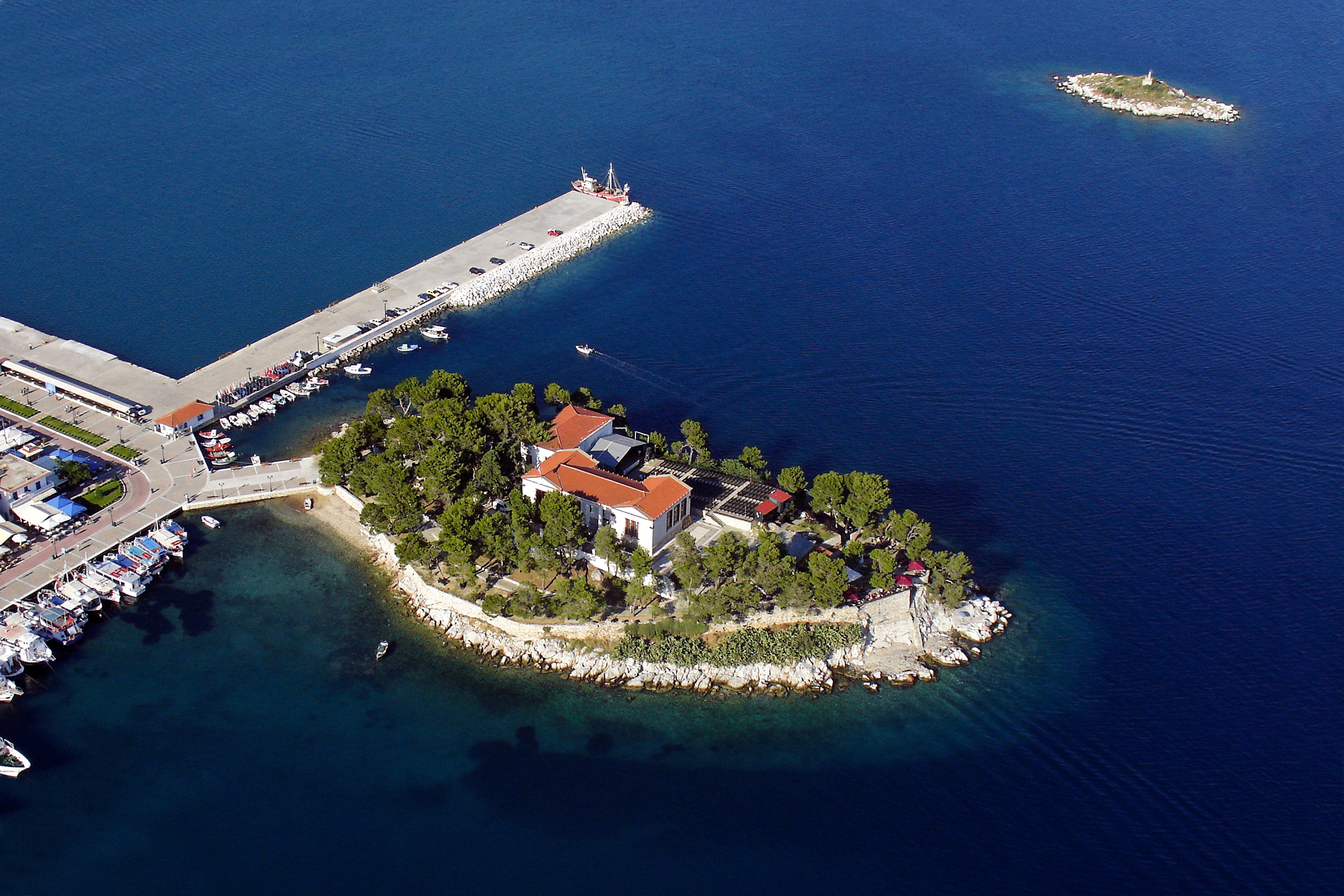 The Shape of Skopelos

The island of Skopelos is the shape of a saxophone.  The main town and port is called Chora and at the opposite end of the island is the small port of Glossa. They are polar opposites: Chora, lively and bustling - Glossa, quiet and sedate.  Building on the island has been strictly regulated since the 1970s. Architectural guidelines are in place to retain a graceful appearance sympathetic to the towns and waterfront villages.

The forests covering much of Skiathos once provided wood for shipbuilding. One or two businesses still make wooden caiques, using skills that were around hundreds, maybe even thousands, of years ago.

Hora, once the capital of Alonissos, was abandoned in 1965 when an earthquake forced residents to move to the coast.  The old town, full of cobblestoned streets and stairways circling Venetian buildings, is an interesting place to visit. The views – especially the sunset – are special.

Boat trips from Skiathos Town will take you round the island or out to an uninhabited island called Tsougria.  Some trips go to stunning Lalaria beach, which can only be reached by sea. It has white pebbles which contrast with the blue sea – the two colours of the Greek flag.

The Scent of Alonissos

The Women's Association of Alonissos, based in the main town of Patitiri, sells home-made foods from recipes handed down through local families. Their ingredients include oregano, thyme, chamomile, sage and mountain tea - herbs the island is renowned for.

The 20 Islands of the Sporades

There are more than 20 islands in the Sporades but only four are inhabited.  Alonissos and some smaller islands are part of a massive nature reserve that protects hundreds of plants and animals as well as archaeological finds, such as ancient shipwrecks.  An island called Piperi is strictly off limits because endangered monk seals live and breed there.