Andros at a glance

What? Aren’t the dry and dusty Cyclades famous for brilliant-white, flat-roofed cube-shaped houses in barren landscapes?

Yes, but this is Andros, said to be the greenest of all 220 Cycladic islands.

Beautiful Andros may be different but it still has the greatest attributes of the other islands – amazing beaches, crystal-clear seas, friendly people and fascinating history.

It’s only 25 miles long but there are four mountain ridges hiding gorgeous villages. There are four rivers that never run dry and about 100 beaches crammed into 70 miles of coastline.

One of the longest and widest is at sheltered Batsi, the main resort built on gentle hillsides around a sandy beach. There are lots of tavernas and bars and an outdoor cinema in summer.

It’s only a few kilometres along the coast from Gavrio, the main port used by the always-impressive super-ferries. This western side of the island has many beaches, including superb Chrissi Ammos. The name describes it – a long beach of soft “golden sand”.

The main town, Chora (but sometimes called Andros Town), is extraordinary.  It is built on a narrow granite peninsula that stretches into the sea.  Stylish, red-roofed houses and white marble piazzas remain from when Andros was a wealthy and successful port.  Cars are banned.

At the end of the peninsula are the ruins of a 13th century Venetian fort, reached by a tiny arched bridge. Beyond that is the only lighthouse in Greece to be built on a rock sticking out of the sea.

Exploring the gems hidden in the lush countryside reveals what’s special about Andros.  Spring water spurts from the mouths of stone lions near the village of Menites. There’s a small lake and waterfall at Gerolimni.

Apoikia is the source of mineral-rich Sariza water which is bottled in the village.  Nearby are the lovely Pythara waterfalls and ponds, known appropriately as “fairyland”.  That’s different. 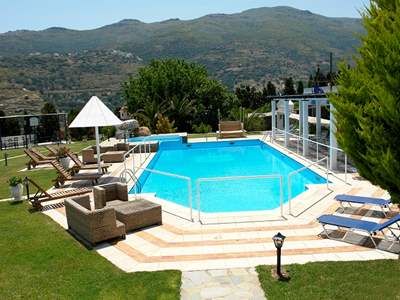 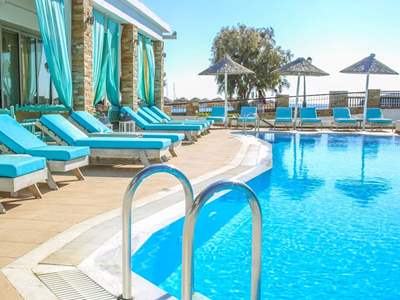 Andros has a Mediterranean climate. The average daily temperature from June to September is 26 degrees Centigrade and very little rain falls in those months. The maximum temperature in July or August will be nudging 30 degrees and the sea temperature is likely to top 25 degrees.

The “shoulder” periods on either side of the peak summer months will have average temperatures of between 16 and 23 degrees. The sea temperature could stay above 20 degrees until November. October can be quite wet but most of the island’s rain falls between November and February.

The island’s big event, the three-week International Andros Festival, is scheduled to start on July 28 in 2020.  Concerts, plays and dance events are staged in an outdoor hillside theatre in Chora.  The semi-circular theatre, built in the style of an ancient Greek theatre, can hold more than 800 spectators.

Gavrio holds a two-week sports and cultural festival on the first two weeks of August.

Car hire: It’s the best, if not the only, way to explore Andros. Good roads cover a large part of the island, but not all roads are surfaced. Car hire is available in several places, including Chora, Gavrio and Batsi.  Some businesses deliver cars to customers’ accommodation.  Think about a 4x4 if you don’t want to park and walk to get to more remote areas.

Taxis: They operate from Gavrio, Batsi and Hora. Fares are fixed nationally. Some drivers provide island tours. Water taxis run along parts of the west coast.

Others: Road and boat sightseeing excursions are available. Quad bikes, motorboats, scooters, moped and cycles can be hired. Organised walking tours can be booked. 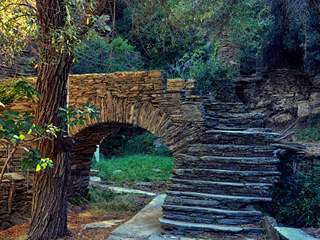 Old donkey trails that criss-cross Andros, are a great way to discover the secrets hidden away in the Andros countryside. 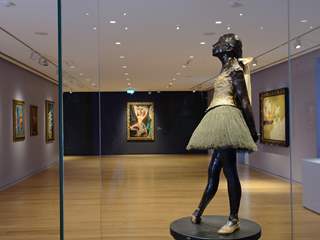 World famous artists have had their work exhibited in Chora thanks to the philanthropy of an Andros-born businessman who established a modern art museum.

Why is Andros called Little England?

As a Greek island the sea had always played an important role in the life of Andros. But in the 19th century it’s seafaring business took off and it became an island of ship builders. By the early 1900s it was one of the busiest marine areas in Greece, busy enough to be compared with the shipping might of England, hence the nickname Mikra Anglia, or Little England.  In 2013 a Greek film called Mikra Anglia was made on Andros. It was based on an award-winning novel largely set in the Second World War.

When is the Andros festival?

The three-week long, International Andros Festival is scheduled to start on 28 July 2020.

How long is the island of Andros?

Andros is 25 miles long and has 70 miles of coastline dotted with 100 beaches.

Lively or quiet, busy or secluded, huge or tiny; we review the top beaches in Andros in our blog article.