Athens Riviera at a glance

Have you been torn between visiting the attractions of a major European city and relaxing on sun drenched beaches? You don’t need to be! The Athens Riviera combines the wonders of a vibrant city with an unbeatable history all just a bus ride from some of Greece’s most idyllic and glamorous beaches.

Despite being a popular getaway spot for Athenians to escape the summer heat of their city, the sheltered 55km (34 miles) Athenian coastline is relatively tourist free, at least for now.

Just a 20-minute journey by car from the city centre (45 inexpensive minutes by tram) will bring you to Glyfada, the ‘Gateway to the Riviera’. It’s packed with high end stores, city beaches, hip restaurants, lively bars and clubs. Glyfada is the Athens suburb everyone wants to move to.

The coastal tram line installed for the 2004 Olympics, provides a cheap and easy way to travel between the coast and the city. The last tram stop is at Voula - but the Riviera doesn’t end there.

Continue south along the interesting Saronic Gulf coast and the crowds begin to dwindle and the more lovely the beaches become. You can still find beach bars and organized sun loungers and sun umbrellas in the resorts of Vouliagmeni or Varkiza but you can also seek out a quiet cove and maybe even claim it as your own for a while.

By the time you reach the southernmost point, at Cape Sounion, the urban sprawl is long gone and replaced by the kind of idyllic, palm-fringed coastline more often seen on Greek islands.

Marble columns in the Temple of Poseidon at Cape Sounion, create a spectacular sight and provide a 2,500-year link between Ancient Greece and 21st century mythology. Fans of Percy Jackson, fictional demigod star of books and films, was said to be Poseidon’s son. Fans flock to the Cape as they trace their hero’s stories.

The Athens Riviera is not without other cultural and historical attractions too: open air theatres, 5th Century BC temples, the beautiful Stavros Niarchos Park, marinas, spas, a technological and culture park and even a floating museum.

Where to stay in Athens Riviera 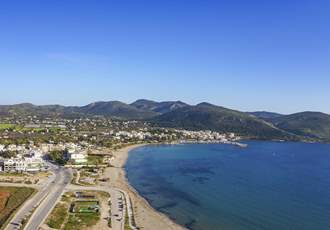 Anavyssos is an attractive settlement and holiday destination popular for its thriving town and sweeping bay. 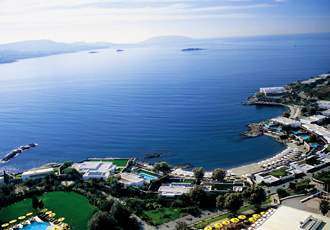 Lagonissi will wow you with its film-star good looks. Beautiful beaches, swanky marinas, restaurants and bars line this lovely strip of the Saronic Gulf. 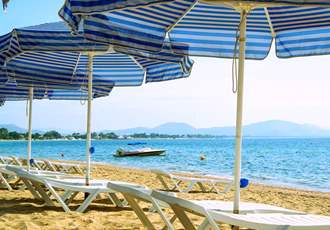 The pretty resort of Nea Makri clusters around an enclosed harbour lined with palms trees and places to eat and enjoy the scenery. 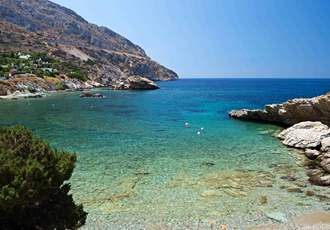 Scenic and sophisticated, Sounio’s main claim to fame is the Temple of Poseidon which commands a lofty perch at the tip of the peninsula. 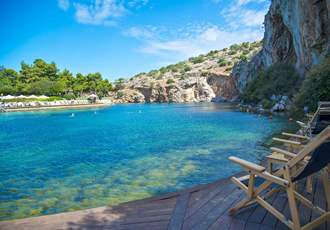 Sun, sand, sea and the warm, reputedly restorative waters of a natural lake make for relaxing days and evenings centred on eating out. 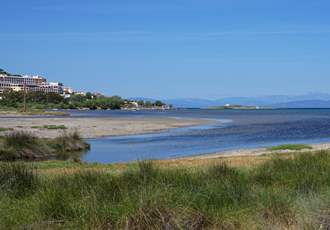 Top Hotels in the Athens Riviera 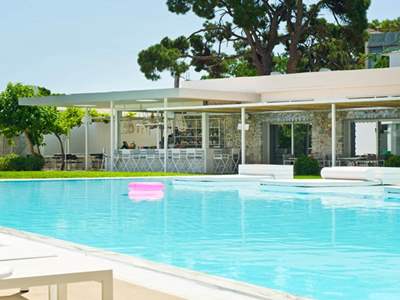 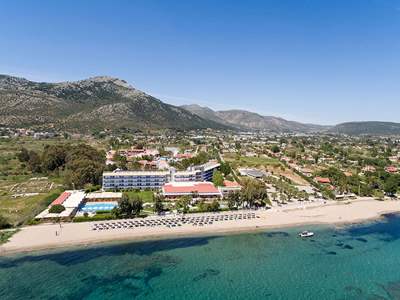 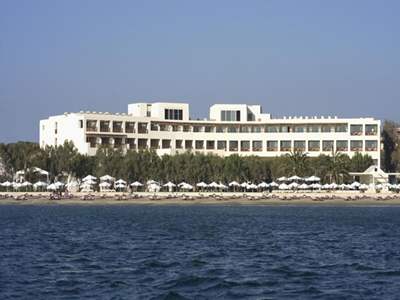 Greece’s lovely Mediterranean climate means good weather can be expected for much of the year. The peak summer months of July and August can be very hot in the city centre making a holiday on the nearby coast even more appealing. If you avoid the middle of the day this can be an excellent time to visit.

Enjoy the beach and sea in the day and spend the evening – or longer - in the heart of the city. Or take in the cultural attractions of Athens by day and escape back to the coast to enjoy the lively nightlife. The Athens and Epidauros arts festival is a highlight of the Greek summer calendar promising magical summer nights of entertainment. It runs from May to October and includes music, theatre and other cultural events. One of the venues is the 2nd century BC Odeon of Herodes Atticus on the southern slope of Acropolis Hill.

The most important festival in the Orthodox calendar after Easter is the Assumption of the Virgin (August 15th). This is the heart of the holiday period and almost all the businesses in Athens close.

The August Moon Festival is held on the full moon (usually around the 20th) and it is the only night when more than a hundred of the city's historical landmarks, archaeological sites, and museums offer free admission, and many become the venues for concerts, plays, and other performances. Imagine the Acropolis in the moonlight!

Visiting in the spring (April to June) or autumn (September and October) will mean milder weather with sunshine pretty much guaranteed. As a major city, Athens is always busy and bustling with its tourist attractions open all year round. The beaches will be far quieter (although the sea will be cooler) but, unlike the islands, most of the shops and restaurants serve local people so remain open in these “shoulder” months on either side of the peak season.

The International Jazz and Blues festival is held annually around the end of May or early June at the lovely theatre of Lycabettus. Jazz artists from around the world play on top of this historical hill with fabulous views of the city.

Athens International Film Festival Opening Nights, organised by Athens Film Society in September, presents audiences with a hand-picked selection of independent film productions from all over the world.

The winter months bring more mixed weather with some cooler temperatures and rain, but it can be like an Indian Summer and that’s when taverna owners quickly put their tables outside once more. Athens comes alive during these months and there is nothing like a night out in the city or wandering around all day shopping, going to museums or hanging out in cafes and restaurants.

Car hire: The 34 miles along the Saronic Gulf makes a fascinating drive with spectacular views. You must be at least 21 to hire a car in Greece and to have held your license for a minimum of 12 months. Some car suppliers have an upper age limit of 70. A car also makes it easier to find the quieter coves and beaches.

Metro: The metro works well and posted maps have clear icons and English labels. Trains operate from 5.30am to 12.30am, every four minutes during peak periods and every 10 minutes off-peak. The metro lines won’t quite get you to the coast. Athens metro line 1 (Green line) stops at Faliro for a connection to the coastal tram that ends at Voula. Metro line 2 (Red line) to Elliniko station is a short taxi ride to Glyfada. Buses are available too.

Taxis: Taxis are available 24/7 in Athens. Taxis from the airport to the city cost a flat rate of 38 euros in 2019. Short journeys around the city can be as little as 5 euros – just make sure the meter is running to avoid a dispute about price. Taxis from Elliniko station will cost 7 euros to Glyfada; 8 euros to Voula; 9 euros to Vouliagmeni and 14 euros to Varkiza.

Bike Hire: If you want to explore the city at your own pace then there are numerous bike hire shops in the area and lots of cycling paths. It’s possible to hug the coast for almost the whole length of the Riviera. And if you have the energy there’s a cycle route into the heart of Athens alongside one of the metro lines.

Buses: Yellow Trolleys and Blue Buses can take you anywhere in the city or to the suburbs. The system is being computerized so buses will show you where you are and what the next stop will be. Tickets can be bought from kiosks or special stands in some squares. They operate every 10 to 20 minutes up until midnight and can be hailed by putting out your arm or waving.

Trams: The Athens' trams are an excellent service and a great way to see the coast. Trams run from Syntagam, opposite the National Gardens, to the coast, then split: east to Voula (one hour) via Glyfada and west to Faliro (45 minutes). Ticket vending machines are on the platforms. 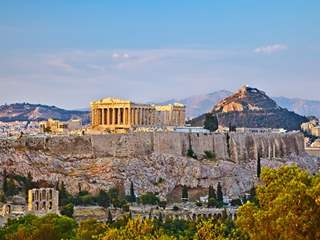 The Acropolis of Athens

The Acropolis is the crown jewel of Athens, a city bulging with precious gems of history.  Go there and you can’t miss it. The rocky citadel rises almost 500ft above the city, its white marble gleaming in the sun. 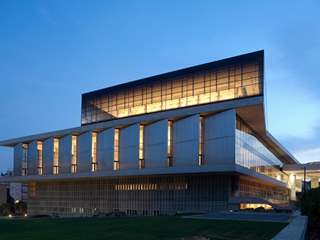 A fantastic journey through time starts before you get inside the Acropolis Museum.  Visitors walk over glass windows in the pavement and peer down on ancient Greek history. 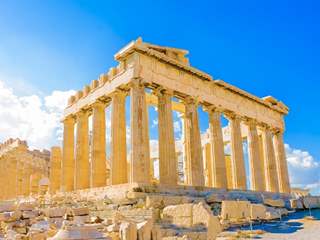 It was built as a temple worthy of Athena, goddess of war and wisdom.  It was designed to hold a huge gold and ivory statue of her. It stands on giant marble blocks and almost 70 massive pillars supported the marble-tiled roof. Beautifully carved friezes of figures on a ceremonial procession or at war once decorated its walls. 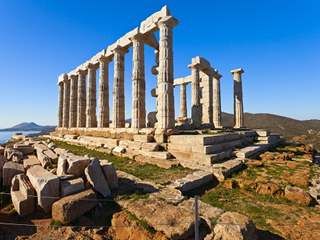 For nearly 2,500 years the Temple of Poseidon has been welcoming people to Greece.