Leros at a glance

Leros is different in many ways. It’s a tranquil Greek island that is serene and surprisingly green, with small valleys between rolling hills. It has natural springs feeding olive groves and grape vineyards.

It has an unusual three-in-one capital – the romantic and beautiful Agia Marina, traditional Platanos, with its market and shops, and picturesque Pandeli, a cosmopolitan village with a lovely marina and pretty windmills.

An 11th century Byzantine castle, once the home of crusader knights, looks down from a hill above the villages. In the 16th century the castle resisted invading Turkish forces. Now it welcomes tourists - and provides stunning panoramic views.

The castle, lit at night like a shining island crown, hides a miracle.

Behind the castle walls, the ornate Church of the Panagia contains a medieval icon that miraculously defied Turkish rulers’ persistent attempts to lock it away.

Phoenicians, Spartans, Romans, Ottoman Turks, Italians and Germans are among the many who have occupied Leros.

Mythology says that one of the first regular visitors was Artemis, goddess of childbirth and hunting. The goddess, usually depicted with a bow and quiver of arrows, was attracted by deer that roamed there.

The remains of a sanctuary to Artemis were discovered on a hill near the fishing village of Partheni.  It has one of the many remote beaches tucked away in the twist and turns of the fascinating coastline.

If you prefer relaxing on a sunbed there are many choices, including Pandeli, Alinda, Gourna and Crithoni which all have lots of facilities and tavernas. Then there is the deep blue, crystal clear and delightfully warm Aegean Sea to enjoy and several interesting islets waiting to be explored around Leros.

The friendly local people, who are passionately proud of their traditions and culture, serve up wonderful food in lovely tavernas and chic restaurants. But that isn’t so different in Greece!

Where to Stay in Leros in Leros 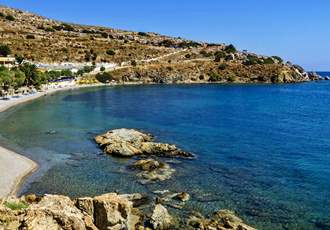 A thriving and popular resort, offering the best beach on the island with a gently shelving sea and the shade of Tamarisk trees. 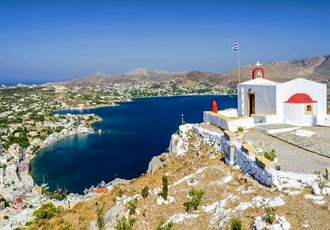 The atmosphere is more authentic than touristy, in spite of being in one of the most popular parts of Leros 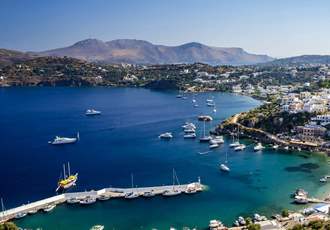 A pretty working fishing village with a friendly atmosphere, Pandeli is the perfect place to slow down to the pace of Greek island life. 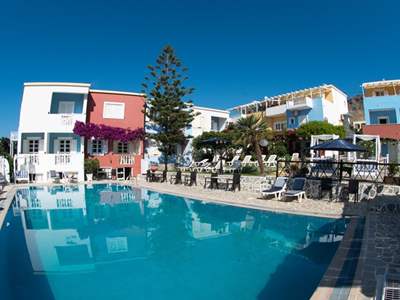 Cultural and artistic events and festivals are held in Leros throughout the summer. And the lovely Mediterranean climate means this tradition-steeped island has the weather to help visitors make the most of the events.

In June, July and August the sun shines for about 12 hours a day. The temperature rises to a bit above 30 degrees Centigrade and will still be around 25 degrees overnight – perfect for eating out under the stars. It hardly ever rains in these peak holiday months.

About nine hours of sunshine can be expected in May and September when the average daily temperature is still in the mid to high 20s. The average sea temperature is still a very comfortable 26 degrees in September but in May it’s a slightly more bracing 21.  There will be a few rainy days in the months on either side of the key season but most rain falls between November and February.

Concerts and traditional dancing, art exhibitions and cultural and religious festivals are among numerous summer events held in Leros. Some are held in the delightful courtyard of the folklore museum in Alinda. Here are some highlights.

The island’s biggest traditional festival, a two-day event, is held to celebrate Agia Marina, the island’s patron saint, on July 17.

A demonstration of traditional threshing is held at the festival of Alonari in late July. Once the threshing is over the floor is cleared and a party starts.

The church of the Madonna, in a castle high on the hill above Platanos, is the stunning focus of the festival of the Virgin Mary on August 15. Celebrations are held in the town the previous evening.

A chance to sample the local food and drink comes at a feast of local cuisine held on the beach at Drimonas in August. And in September the local fishermen are celebrated with a feast of freshly caught and grilled fish on Panteli beach.

A wine festival and a grape pressing demonstration are held in the village of Xerokambos in the last week or so of August to coincide with the feast of Agios Fanourios on August 27. Traditional dancing, lots of food and, of course, wine.

Three-days of cultural events are held to commemorate the World War 2 sinking of the Greek destroyer Queen Olga, with the loss of nearly 80 lives, in the deep-water port of Lakki on September 26, 1943.

Leros is small enough to make getting around quite easy. Lovely Xerokambos, in a small bay on the southern tip of the island, is only four miles from Agia Marina. Partheni, the northernmost village, is only five miles away.

Car hire:  Paved roads extend from the top to the bottom of Leros so hiring a car, scooter or moped will enable you to explore at your leisure and find places off the bus routes. There are rental businesses in Pandeli, Alinda and Lakki. A full UK licence will be required for whatever type of vehicle you want.

Boat hire: You don’t need a licence to hire a small motorboat to explore some of the many tucked away little coves.

Buses: The main bus depot is in Platanos. The service runs several times a day in the summer and goes to Agia Marina, Crithoni, Alinda, Lakki and Platanos.  Even Partheni, in the north, and Xerokampos, in the south, are on the bus route.

Ferries: There are regular catamaran services to the main Dodecanese islands, such as Kos, Kalymnos, Patmos and Nisyros. Local ferries go to Kalymnos and smaller islands such as Lipsi, Arki and Agathonisi. Some resorts have small boats providing taxi services to more remote beaches.

Walking and biking:  The name of the island probably stems from the word “levros” which means smooth. It got the name because it’s a lot flatter than most Dodecanese islands – so a great place to explore by foot or bike. You don’t have to stay on the asphalt roads, there are several marked trails that enable walkers and cyclists to get off the beaten tracks and find those secret sandy coves, ancient ruins and World War 2 sites hidden around the 30 miles of coastline.

Chill out in front of the big screen in Lakki’s cinema, a preserved building simultaneously reminiscent of a stone amphitheatre and the vast Odeon cinema buildings of post-war Britain. 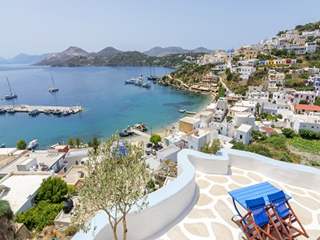 On the road to Platanos near the Marina, this 19th-century building houses a collection of artefacts found on Leros and nearby.

On the waterfront at Krithoni, neighbour to Alinta. Leros was the scene of some fierce fighting between British and German forces after Italy’s surrender. The cemetery contains the remains of nearly two hundred British and allied forces.

On the marshy north coast of Leros, feel the touch of time when you visit this unexcavated site while Artemis was worship. To the south of the settlement Partheni, in the church of Agios Georgios evidence of a chancel dedicated to Artemis was found dating back to the Hellenistic Period.

How does Olympic Holidays get its customers to Leros?

We fly to Kos, the closest Dodecanese island to Leros with an international airport. The flight is about four hours. We then transfer to the port at Kos Town and catch a ferry to Leros. The journey time depends on the kind of ferry available. Conventional ferries take about one hour 45 minutes but catamaran ferries can do it in under an hour.

What’s the link between Leros and The Guns of Navarone?

The dramatic Guns of Navarone film and war story, about efforts to silence coastal artillery guns in World War 2, was fictional. But author Alistair MacLean based his story on real-life events in Leros. The Italians, who controlled the island until 1943, sited guns on the cliffs that were among the largest coastal artillery used in the war.  There is a British war cemetery in Alinda.

Why does Lakki look different to most Greek island towns?

It’s the Italian connection. Italy ruled the island from 1912 until 1943 and pumped masses of money and manpower into re-development. The potential benefits of the deep water at Lakki persuaded the Italians to build a new port there. And 80 years later the Italian-designed concrete and metal buildings, boulevards and villas are still in use and looking very different from the traditional Greek villages of Leros.

Are there any ATM cash machines in Leros?

Yes, four. There are two in the capital, Agia Marina, and two in the main port of Lakki.