This stunningly pretty town, with the brightly painted balconies of the white washed cube shaped houses and a maze of narrow streets, is gathered around its harbour in the middle of a wide bay. Legend has it that the streets of Mykonos town, which locals call Hora, were designed to confuse pirates, so your own confusion will be understandable.

Who holidays in Mykonos Town?

Mykonos Town holidays cater for all, especially those looking for a lively and varied nightlife.

From the harbour, you can see the main square beyond the small town beach and a cluster of buildings; we refer to it as Taxi Square. Here you'll find several travel agents, kiosks, snack bars and of course, the town's taxis stand.

The main street, Matoyanni, leads south off Taxi Square behind the church. It's narrow, but you can hardly miss the bars, boutiques, and restaurants. Several 'blocks' along it you'll find a 'major' cross street, Kaloyera, and by turning right, you'll find several hotels and restaurants. Traffic is banned from Mykonos town centre thus the character of the town has been preserved. If you get lost - and you will - remember that in Mykonos that's part of the fun. The excellent Mykonos Sky Map is free at some hotels and shops.

Popular activities for those taking holidays in Mykonos Town include:

Delian Sunset Cruise: The route takes visitors to Delos with a view to the ancient harbour and ruins, then between Delos and the coast of Rhenia past the little islands "Ano and Kato Rematiaris" towards the South to the uninhabited islands "Prassonissi" where we can enjoy the magic light of the sun setting over Delos. Onboard snacks and drinks available.

Delos and Rhenia Cruise: First we sail towards Delos Island. When we reach it the clients who are interested can visit it, you will be transferred to its harbour and will be given two hours to explore the ancient site. The rest stay on the boat watching the site from the deck, sunbathing and enjoying an aperitif. Then we proceed towards the Island of Rhenia and we dock by a deserted beach where the participants have time to take a swim in the crystal clear waters, sunbathe on the fine sandy beach or stroll around the place.

Island Tour: Starting the city and Island tour by walking the small and narrow streets. We get orientation and information in the labyrinth of the old town as well as impressions of the small port and the churches in town. After this we are exploring the island with a bus, visiting some of the most famous beaches and the inner landscape. In the second main village of Mykonos, Ano Mera, an idyllic place 6 kms from town, where the guests have enough free time for a stroll around the traditional square and they can visit the monk monastery Panagia Tourliani built in the 16th century. Next stop is Kalafatis beach where there is time to relax a little and have a coffee or a refreshment, before going back to town and to reach a place with a fantastic view all over the town and neighbouring islands.

Jeep Safari: Discover the hidden corners and secret of Mykonos off road. Marvel at the stunning, rugged scenery. Visit the lighthouse and the beautiful bay of Choulakia. Enjoy a cooling swim at Agrari beach and take advantage of some fantastic photo opportunities.

Tinos Tour: The catholic pilgrimage island in Greece - Visit the extraordinary village of Pirgos or 'the marble village', the village of Volax, and stop for a swim or lunch in a fishing village. Visit a monastery still inhabited by nuns and take a photo of the amazing 'valley of the pigeon houses'.

For further information and to secure your place on all the above exciting days and nights out, see your Olympic representative in the resort. The best time to book would be at the Welcome Get Together on the day after arrival.

Mykonos Town: The centre of all the action, the heart and soul of the island. This is where you will find the majority of restaurants, bars, shops, and major tourist infrastructure of the island. It is a stunning, pretty town, with the brightly painted balconies of the white washed cube shaped houses and a maze of narrow streets. It also has a great nightlife.

Little Venice: It is located in Mykonos Town and it is considered as one of the trademarks of Mykonos Island. It is more exactly situated in the area of "Alefkandra". If you get there, you will really be impressed by the landscape.

The Nautical Museum of the Aegean: This attraction is situated across from the park on Enoplon Dynameon street. You will find just what you would expect, including some handsome ship models.

Archaeological Museum: Located adjacent to the town's commercial harbour this museum houses marble sculptures, ceramics and jewellery, recovered from the islands of Delos, Renia and Mykonos. Included in this collection is a large ceramic vase dated 7th century BC which shows the oldest graphic record of the Trojan horse.

Ano Mera: The village of Ano Mera, 7 kms east of Chora is the island's only inland settlement. It is still untouched by tourism. On its central square is the sumptuous 6th Century Moni Panagias Tourlianis, with its fine carved marble tower, ornate wooden iconostasis' and paintings from the 16th century. The main square is lined with real Greek tavernas and Kafenions which give the village a genuine traditional feel. Northwest is the village of Moni Palaiokastro, a 17th century working monastery.

Delos: Delos is a tiny uninhabited island just off the coast of Mykonos and is one of the most important archaeological sites in Greece. According to legend, Leto gave birth to Apollo and Artemis here. Once the most important place of pilgrimage now a spectacular open air museum with mosaics and marble ruins. 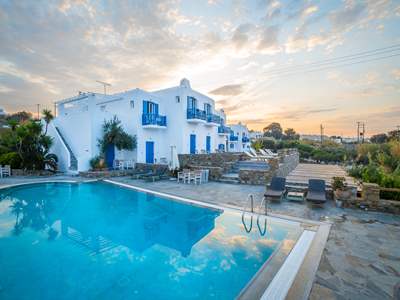 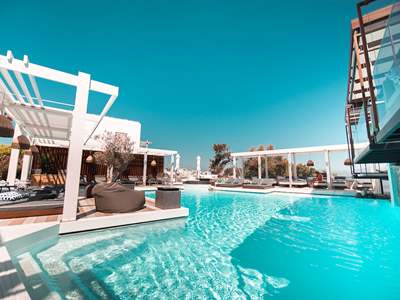 All hotels in Mykonos Town