Samos at a glance

There may be only one place in the world where tourists can walk through a tunnel that was cut in a mountain nearly 3,000 years ago. And that’s on the lovely lush green Greek island of Samos.

An astonishing number of delights are packed into this peaceful East Aegean island and it’s only 26 miles long. Here are some:

Twenty beaches, at least, that range from stretches of fine golden sand covered in sunbeds and busy with water sports to lonely, secluded coves of sand or pebbles hidden beneath towering cliffs.

Pythagoreio, the main resort named after the Ancient Greek mathematician who was born on Samos. Have a drink in a café beside the pretty harbour first built when Pythagoras was walking the cobbled streets 2,500 years ago.

Waterfalls, streams and lakes in a gorge that leads to beautiful Potami beach. This is a stand-out feature on an island bursting with beautiful countryside. Climbing, caving, walking and cycling are popular pursuits on Samos.

Vathy, the intriguing two-in-one main town. The lively harbourside area is known as Samos and the winding streets and classical houses on the hillside are the old village of Vathy.

The temple and sanctuary to Hera, the goddess of women, is a world heritage site. Mythology says Hera was born and raised on Samos and the first temple to her was built there more than 3,000 years ago.  A giant statue of a naked man was found there.

Samos is a fantastic place to relax and enjoy the friendly people, great food, award winning wine and just heavenly for sunbathing gods - or goddesses!

Where to stay in Samos 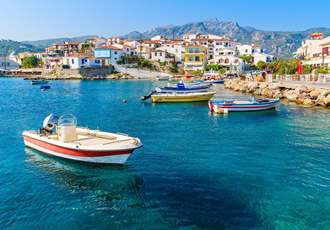 Kokari is the third largest resort on the island of Samos, built around the pretty bay where you will find a lovely shingle beach. 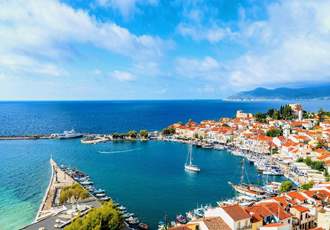 Pythagorion is the most popular resort, a picturesque circular port full of colourful fishing boats and a small town beach. 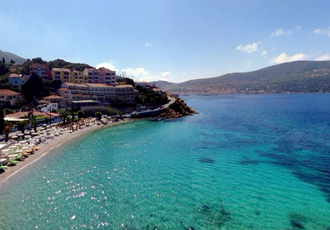 The islands capital, Samos Town, is beautifully situated on a deep inlet, ideal for those seeking a peaceful atmosphere. 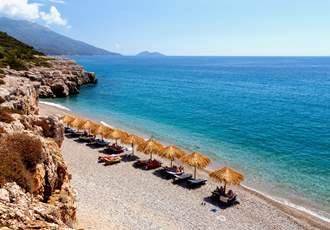 Votsalakia boasts an amazing beach which is never too busy, with a relaxed pace that will gently drift you into a state of relaxation. 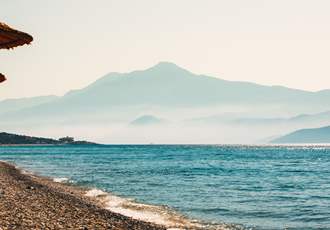 Why do Samos and Lesvos have a town with the same name?

Mytilini is the name of the capital town in Lesvos, which is another Greek island in the Aegean Sea. It is also the name of a small town in Samos. The link is an earthquake in Lesvos about 300 years ago.

It destroyed villages and forced families to flee. Some of them ended up about 170 miles away in Samos where they founded a village in the mountains. They named it Mytilene where more than 2,500 people now live. Tourists go there to enjoy a movie under the stars in a highly-rated outdoor cinema and to visit the Natural History Museum.

What have the tortoise and hare to do with Samos?

Not just the tortoise and hare but the boy who cried wolf and any of the other fables attributed to Aesop, the Ancient Greek writer. Aesop was a slave who, it is said, lived on Samos and became known for three things.

He told good stories, he was ugly and clever, so clever that he became an advisor and philosopher but not smart enough to avoid being sentenced to death in Delphi.  The trouble is there is no proof that he actually wrote any of the fables that were first attributed to him about 300 years after his death in 564BC.  However, the legend has gone on growing and there are now more than 700 Aesop Fables.

Are there any ATMs / cash machines in Samos?

Yes, ATMs are fairly common in main towns and resorts in Greece, although they may be hard to find in rural areas. They accept debit cards from most major credit card companies. Many machines have an English language option. In Samos they are at the airport and in Vathy, the main town,  and Pythagoreio, Karlovassi, Ireo and Marathokampos.  The addresses can be found on your credit card company's online ATM locator.  Sometimes the ATMs are in a room outside banks but ATM cards will open the locked door. Banks in Greece tend to be shut in the afternoons and at weekends. Travellers' cheques are no longer widely used. Some banks are now reluctant to accept them although currency exchange offices will take them if they are in euros. 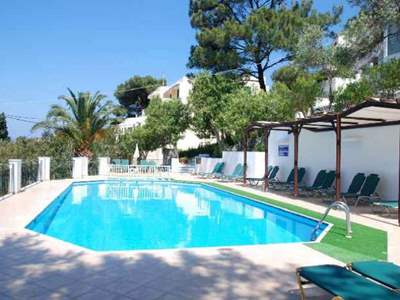 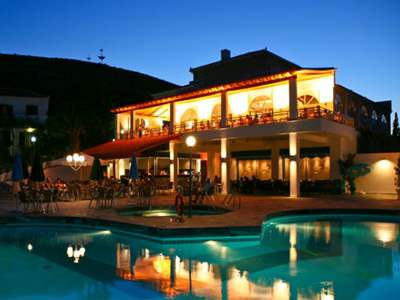 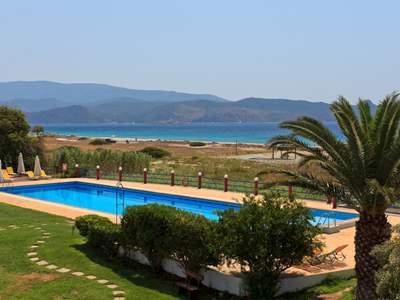 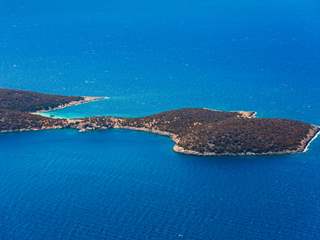 Sea and land excursions from Samos

Why not hop off to another island on a super excursion while on your Samos holiday – or even visit another country. 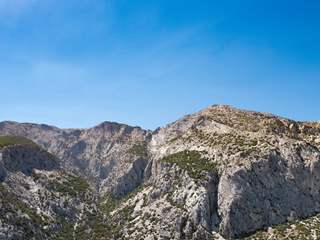 Caves of Pythagoras on Mont Kerkis in Samos

Find out why the famous mathematician and philosopher Pythagoras was forced to hold classes in mountain caves in Samos.

Samos has a Mediterranean climate which means it is hot and dry in the summer, wet and mild in winter.  If you want a mainly beach holiday go between June and September when the sun will shine for up to 14 hours a day and temperatures will hit 30 degrees Centigrade or even higher. There is usually an afternoon breeze.

Samos takes advantage of the lovely summer weather by providing a mixture of festivals. July sees an annual food and cultural event and August a three-day rock music extravaganza and a wine festival that starts in the village squares and ends up in the main town, Vathy.

Hiking, cycling, climbing or exploring the many historical sites is better undertaken on either side of the peak season. In May and October the sun still shines for several hours a day and temperatures will be in the mid-20s. It may rain on four or five days in those months but by far the rainiest days in Samos are between November and February.

Average sea temperatures are 18 degrees Centigrade in May and November and around 23 degrees in July and August.

Car hire: Much of the island can be explored by a reasonable network of metalled roads, making driving an excellent option. Car hire companies are based in all resorts. You need to have a full UK driving licence and be over 21 to hire a car. Licence requirements could be changed by Brexit.

Buses: There are about 20 KTEL buses serving Samos during the holiday season. They provide regular and reliable links to most parts of the island and many of the beaches.  There is an online timetable in English.

Taxis: All main resorts have taxi ranks and cabs can be ordered by phone or flagged down in the street. Journeys are metered but it is advisable to discuss the fare before the journey. Contact details for all towns and villages and a fare guide is available in English online. Water taxis link some resorts with more remote beaches.

Others:  Mopeds, scooters, quad bikes, mountain bikes, other kinds of bikes and motor-boats can all be hired. An A1 “light motorcycle” licence is required for a moped or scooter and a full car or motor-cycle licence for a quad bike.

Excursions: Coaches and boat trips do round-the-island tours.  Excursions boats go to nearby islands and to Turkey. There are excursions to villages and historical sites and jeep safaris to remote areas.