Thessaloniki (Salonica) at a glance

Pulsating, exhilarating, vibrant, fascinating, dynamic! Just some of the adjectives used to describe this second city of Greece. And no wonder. Thessaloniki is where the 21st century combines brilliantly with thousands of years of amazing history and culture.

It’s a richly rewarding mixture for visitors who are enjoying Thessaloniki in ever-growing numbers.

This laid-back capital of cafe-culture and fun sits in the north-east corner of the Aegean Sea. Its lovely, largely traffic-free waterfront has more than two miles of stylish walkways, coffee shops, monuments and 12 themed gardens.

Its where the locals and visitors meet for the evening volta – strolling and chatting as they admire the splendid sunset. The walk includes the stunning statue of local boy Alexander the Great, sitting on a rearing horse, and the amazing White Tower, a 500-year-old fortress, now a museum.

But Thessaloniki is more than just a resort steeped in history. This lively university city is a shoppers’ heaven with smart, modern shops, large and lively markets, lanes and courtyards teeming with boutiques and cafes.

And with tens of thousands of students at Aristotle University this city knows how to enjoy itself with clubs and bars staying open all night. The university is named after the famous Greek philosopher who was born nearby and there’s an impressive statue of him in a city square.

Byzantine, Roman and Turkish influences are scattered through the city. Thessaloniki’s tumultuous past includes five centuries under Ottoman rule. It’s a heady mix of history and culture in a thriving city that appreciates how busy people need to unwind and relax.

There are sandy beaches a few miles away and Thessaloniki is a gateway to some spectacular parts of Greece. Mount Olympus, the country’s highest mountain and legendary home of the gods, can be seen from the waterfront on a clear day. And the first beaches of beautiful Halkidiki are about an hour’s drive away.

By walking around. It’s regarded as one of the best cities in Greece to explore on foot. The city centre is quite compact, flat and close to the waterfront and port.  In the older, steeper parts of the city the roads are narrow and more suitable for walking than driving.

There are all kinds of walking tours available. Some concentrate on the top sights, others on specific areas or subjects such as food or art. Guided tours can be booked and there are free tours too. You don’t pay upfront but tip the guide at the end.

Is Thessaloniki good for shopping?

It’s a dream. Boutiques, department stores, shoe shops, fashion stores, jewellers, bookshops and a lot more. From haute couture to budget prices, even a Marks and Spencers. There are stylish high street-style roads, traffic-free lanes and atmospheric alleyways. Tsimiski Avenue, Mitropoleos Avenue, Ermous Street, Agia Sofia Street and Agias Theodoras are some of the places to go. Expect buskers and other street entertainers and the shops are interspersed with patisseries and cafes. A few miles out of town is massive Mediterranean Cosmos with 200 stores, 30 cafes and 11 multiplex cinemas!

Are there any markets in Thessaloniki?

There are two atmospheric traditional markets in the city centre that have been doing business in Thessaloniki for many years. The best known is bustling Modiano Market that sells mainly fish, meat, cheese, fruit and veg. Just over the road is Kapani Market that has been serving the city for centuries and is a mix of food and more general stalls. They are both full of character and there are cafes nearby that use locally grown produce from the markets.

Clear blue skies and plenty of sunshine are practically guaranteed in Thessaloniki throughout the summer months when the average temperatures will be around 30 degrees Centigrade, maybe higher.

The city claims to have 300 sunny days in a year and the temperature doesn’t drop much below 20 degrees at any time of the day or night in July and August. That’s why the pavement cafes and bars stay open late.

The warm Mediterranean climate also explains why the summer sees lively outdoor food, beer and “street mode” festivals.  The last one is a three-day mix of music, street art and dance at the end of August.

The Taratsa International Film Festival is held over five evenings at the end of August, turning several venues into temporary outdoor cinemas.

Even in May and September the thermometer will be in the mid-20s and the sun should be out for eight or nine hours a day. In September thousands of music fans flock to Thessaloniki for the Reworks festival, five days of live concerts, workshops and talks involving a wide range of genres, from club music to classical. Greece’s largest international trade fair is also held in Thessaloniki in September.

Rain is a rarity in July and August but there may be showers on a few days in June or September. The wettest days are in the middle of winter.

Buses:  Thessaloniki's blue-coloured buses cover the whole city and surrounding area. They are run by OASTH (the urban transport organisation of Thessaloniki). Tickets can be bought in kiosks and some shops. There are also ticket vending machines on the buses. The long-distance national Greek bus service KTEL also runs services on some routes.

Taxis: Run 24/7. Find them on “piazzas” (or ranks) all over the city. They also linger outside the top hotels. They can be hailed in the street but on main routes they should only be hailed in designated places identified by a Taxi sign.

Trains:  Suburban and national rail services use Thessaloniki Railway Station, the biggest and busiest one in Greece. It has nine lines and six platforms and cafes.

Metro: The building of an underground service for Thessaloniki began in 2006 but has been delayed by the overwhelming number of ancient artefacts that have been discovered. One estimate has put the number at 300,000 (yes, 300,000!). The expected completion date is now 2023.

Car hire:  There are lots of car hire companies in Thessaloniki, international and local ones. Good main roads link the city to many places of interest. The city centre has pay-by-the-hour parking meters and more expensive private car parks. There are several free park-and-ride or park-and-walk sites on the outskirts of the city. The “Thessaloniki Urban Mobility Center” website provides directions (with an English option).

Cycle hire: There are more than seven miles of cycle routes. The waterfront is the most popular but there are cycle lanes in parts of the city centre. There are numerous bike hire shops. 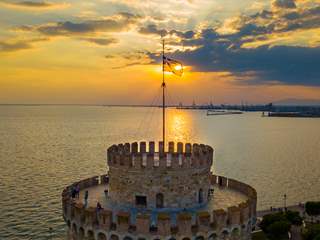 The White Tower on the waterfront is one of the most dominant landmarks in Thessaloniki and is often used to promote the city.  But its name is confusing – because this sturdy 150ft tall stone building isn’t white. 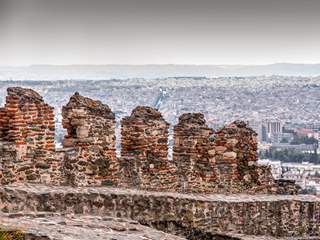 Ano Poli, the Old Town, and the Byzantine walls of Thessaloniki

There are excellent reasons why Ano Poli, the upper town of Thessaloniki, is a great area to stroll around. 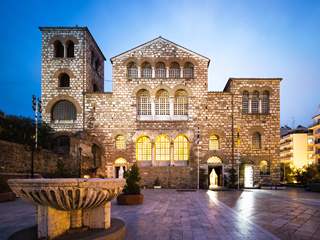 How about these three reasons for visiting the Church of Saint Demetrios.  An heroic story from the days of Romans slaughtering Christians; a crypt where a murdered saint performed miracles; treasures from a troubled past. Let’s start at … 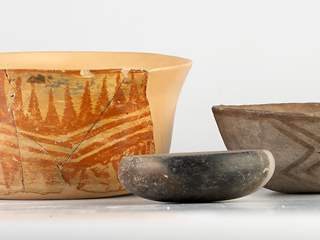 Thessaloniki Archaeological Museum and other museums

Like Athens, Thessaloniki is named after a woman but, in this case, she was a mortal woman not a mythical goddess.  She was a Macedonian princess who was the daughter of a king, wife of a king and the sister of Alexander the Great.