The Dalaman Area at a glance

The Dalaman region of Turkey aka the Turquoise Coast has all the key ingredients for a perfect holiday - outstanding sandy beaches, breathtaking scenery, endless culture to absorb and great nightlife. In fact the list of things to do and see in this region of Turkey is endless. The entire region is overflowing with places of historical importance, breathtaking mountainous landscapes and the water parks of Marmaris provide limitless entertainment for all the family. If however you are in need of some well earned pampering there's always the choice of a hamam or the natural thermal pools at Pamukkale Falls. Opportunities for some great shopping are also widely available particularly if you enjoy a good haggle in the many bazaars. Those looking for pulsating nightlife will also not be disappointed with the clubs of Marmaris rivalling anywhere else in the Mediterranean.

Who holidays in Dalaman?

Holidays to Dalaman are perfect for those in search of a great value holiday with an abundant supply of sun, sea and sand as well an area rich in culture and historical significance.

Our top hotels in Dalaman 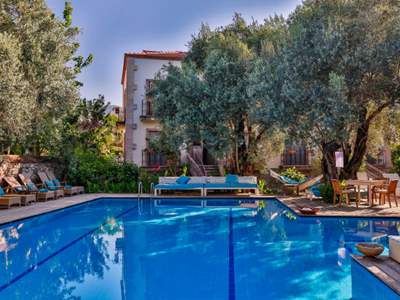 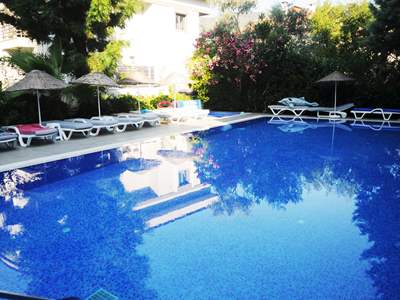 Dalaman itself is a little Turkish Mediterranean farming town south of the coastal road. But most holiday visitors just pass through Dalaman Airport and on to the larger holiday resort such as of Marmaris, the most developed resort in the region with everything you could wish for from a great beach to vibrant nightlife.

The bustling port town of Fethiye also has the lot - amazing scenery, great shopping, vibrant nightlife, close proximity to ancient sites and the opportunity to take a boat ride to one of its neighbouring small islands.

Embraced by mountains and set in area of outstanding natural beauty Oludeniz offers what is widely regarded as one on the best beaches in the world.

The wonderful beach is what inspired the location of the purpose built resort of Icmeler. This pretty, modern resort has managed to maintain a small town feel despite its success. With twisting streets, canals, whitewashed houses and beachfront bars - this is a great place to enjoy a cocktail.

great value. As well package holidays to Dalaman, we offer an excellent range of cheap flights to Dalaman and hotels in Dalaman. Discover the charm and beauty of Dalaman for yourself by booking a cheap holiday to Dalaman today with Olympic Holidays, for great savings on holidays to Dalaman book online or call our reservations team.

Fethiye: Fethiye has a fine beach nearby at Calis, a 4 kms stretch of sand and shingle, which has now grown into a small resort.

Oludeniz: The Oludeniz region has a 2 kms stretch of sand and pebble beach (Belcekiz) linked to a cobalt blue lagoon (Dead Sea), lying calm as a millpond.

Icmeler: It was the great beach that inspired the development of the purpose built resort at Icmeler.

Popular items purchased by visitors on Dalaman holidays include:

White Water Rafting: Enjoy the adrenalin rush of white water rafting and combine it with the experience of camping in the wilderness on the banks of the Dalaman River.

Sailing: The Gulf of Gocek and its friendly marina is one of the Mediterranean's best sailing spots. Some of the wonderful sea journeys, which have become the most popular activity in the region, take place in the beautiful coves of Marmaris.

Paragliding: Hisaronu, at the outskirts of the Mount Babadag-Oludeniz, is regarded worldwide for paragliding.

Atlantis Marmaris Waterpark: The biggest waterpark in Marmaris offers a full-day of fun for the entire family.

Salikent Gorge: A spectacular gorge cut into the Akdaglar mountains, the narrow gorge is 18 kms long and so deep the sun doesn't penetrate leaving icy water in the river below, even in the middle of summer.

World heritage listed ruins at Xanthos and Letoon: The site at Letoon consists of three ancient temples containing fine mosaics as well as a large Hellenistic theatre in excellent condition whilst at Xanthos there is a fine example of a Roman Theatre.

Kayakoy: Just 5 kms west of Hisaronu lies the ghost town of Kayakoy where 2000 stone houses were deserted by its mostly Ottoman-Greek inhabitants following World War 1 and the Turkish War of Independence. An eerie reminder of Turkey's not too distant past.

Tlos: Located 36 kms south of Fethiye, is the oldest city in the Lycian region and the home of the Lycian Hero Bellerophon. Visitors can see the remains of a castle, the agora, the necropolis, the theatre, and the Roman baths and it also offers a great view of the Esen Valley.

Toros Mountains: The mountains form a dramatic backdrop along much of the coast, often dropping steeply into the sea, but in some places rivers have washed down enough sediment over the ages to form beaches.

Tombs in Fethiye: Close to Fethiye the Tomb of Amyntas, which probably dates from the fourth century B.C. is one the most remarkable sites on the Turquoise Coast.

Blue Voyage Cruises: Marmaris is one of the most attractive maritime park lands - ideal for water sports and sailing. It makes an excellent starting point for the "Blue Voyage" tour of the Aegean coastline,

Oludeniz Lagoon: It is a sheltered lagoon of great beauty, almost totally cut off from the sea, at the northern end of a long cove. Stretching from the Oludeniz lagoon to the southern end of the cove is a long, sandy beach.

Boat: There are many types of cruises that link all the resorts an villages around the area, take a Gullet cruise or a Blue Voyage cruise to explore Dalaman and the surrounding areas.

Bus: The local bus (known as Dolmus) is normally a white mini bus that travels around the resorts. There are no specified bus stops, so to stop the Dolmus just flag one down.

Taxi: There are numerous taxis in all towns and resorts and are recognisable by their chequered black and yellow bands.

Car Hire: Provides a flexible and convenient way of getting around whilst on holiday to Dalaman. You can add car hire when you book your holiday.

Where to stay in The Dalaman Area

Fethiye is one of the most popular resorts. Hisaronu resort is a picturesque place situated near Fethiye where the nature is incredible in any season of the year. Hisaronu Oludeniz was just a Turkish village, but now it is known as on of the most popular resort towns appreciated by tourists from all ove… 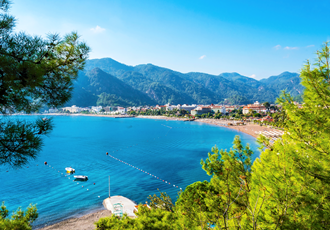 Situated on the southwest coast of Turkey, Icmeler enjoys a beautiful setting, in a sweeping bay, surrounded by pine-forested mountains, the perfect spot for a relaxing holiday. Icmeler is a beautiful resort neighbouring the lively resort of Marmaris. A good s…

Marmaris is a bustling resort on Turkey's Lycian coast, and has long been a favourite for British travellers. With a variety of cafes, restaurants and duty free shopping that keep guests returning year after year. 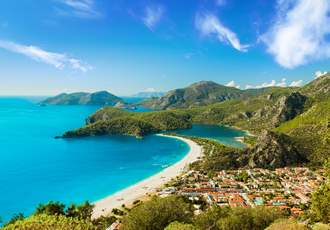 Oludeniz is famed for its blue lagoon nestling behind the end of a beach with a backdrop of mesmerising mountains. 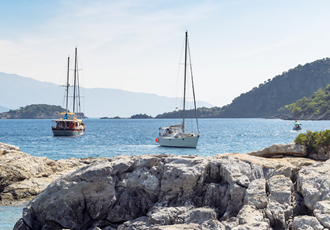 Both Ovacik and Hisaronu were once little countryside villages. Over the past 20 years they have both grown into lively tourist resorts. Hisaronu is the busier of the two with its numerous bars restaurants and nightclubs. Ovacik is the more residential area le…

Sarigerme Village is a tiny little place, yet has all the necessary shops, eateries as well as holiday entertainments one possibly wish. This little Village is about half an hour away from Dalaman Airport. It is a tranquil place. Surrounded by naturally beauti… 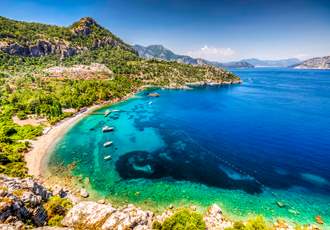 Turunc is located on the west coast of Turkey and it is a quiet village with extreme differences to neighboring resorts of Marmaris and Icemeler. it is a favored destination for culture addicts seeking peace and relaxation in attractive surroundings. 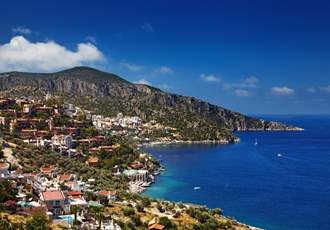 The historic town of Kalkan is an enchanting place and one of the most beautiful locations along Turkey’s gorgeous Lycian Coast. With the absence of mass tourism, Kalkan remains a charming and unspoiled haven of lush nature, brilliant blue crystal-clear sea, h… 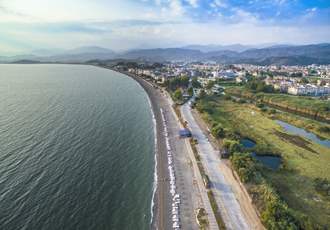 A lovely resort with great access to the great blue ocean. Calis is ideal for guests who enjoy their time on the beach whilst enjoying the local restaurants, bars and shops in the local resort.