How to spend 24 hours in Santa Cruz de Tenerife

Are you planning a holiday to Tenerife? The town of Santa Cruz de Tenerife makes a great day out with lovely places to stop for coffee and lunch, shopping streets and plenty of history and arts to explore.

Stroll into the main square of Santa Cruz de Tenerife, La Plaza de España, to discover one of the town’s hidden gems – an underground museum. Look for a stairway signposted San Cristobal Castle Interpretation Centre to see the extraordinary ruins of the town’s castle below the square.

You can also learn how Admiral Lord Nelson sailed into Santa Cruz de Tenerife with 900 men on July 25, 1797. Nelson’s force could not defeat the town, and the admiral also lost part of his arm in the battle. El Tigre, the cannon used to ﬁre the shot that injured England’s greatest naval hero, is on display.

Walk along the main street leading from the Plaza de España for a quick pit-stop; Palmelita is a lovely old-fashioned establishment at Calle del Castillo 9, serving the most delicious cafe con leche (milky coffee) and toast with local ﬁg jam.

Santa Cruz is known for its links with the surrealist movement, and one of the surrealists’ ﬁrst exhibitions was held here in 1935, featuring works by Magritte, Miro, Picasso, Man Ray, Duchamp and Dali.

To stretch your legs a bit further, take a stroll up from Calle del Castillo to the botanic park of Garcia Sanabria in Rambla de Santa Cruz. An oasis of palms and cacti, fountains, shaded avenues and bougainvillea-clad pergolas, this peaceful park is worth the trip.

It’s also home to the stylish Strasse Café, open from 8am to 2am for al fresco dining, cocktails and dangerously good desserts. Sit upstairs for lunch on the terrace – and to get a bird’s-eye view of the park.

If your green ﬁngers are still twitching, Santa Cruz de Tenerife’s Palmetum is a hop, skip and jump from the cruise port on Avenida de la Constitucion. Here, Europe’s largest collection of palms grow on what was a 30-acre landﬁll site.

This eyesore once blocked views of the sea and the Anaga mountains but is now transformed into a botanic garden. The ﬁrst plants began to arrive in 1996. By the turn of the millennium advisers from the Royal Botanic Gardens at Kew had evaluated the Palmetum’s collection as the best and biggest in Europe.

Further along on Avenida de la Constitucion, don’t miss Auditorio de Tenerife, the capital’s emblematic theatre, which looks like a huge white sailing boat. It’s home to the city’s symphony orchestra and it’s worth checking out what’s on while you’re in port as there are regular opera, classical music and ﬁlm festivals – even on Christmas Day.

Olympic Holidays offers holidays to Tenerife all year round from many local airports in the UK.  The sophisticated resort of Puerto de la Cruz on the northern coast of Tenerife is just a 40 minute drive from Santa Cruz.  Playa de las Americas in the south of the island is just under 1 hour away.

Our favourites in Tenerife 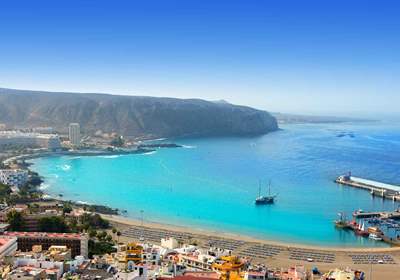 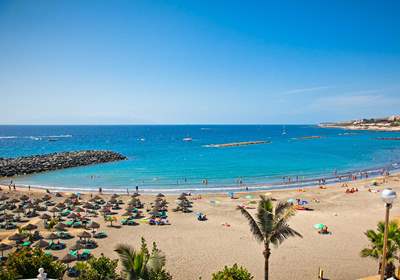 Costa Adeje is ideal for families with children and couples looking for an upmarket alternative to its busier neighbour Playa de las Americas.…