Aegina at a glance

Let the Aegina time machine take you back into the past. To a stunning temple older than the Parthenon in Athens. To an olive grove with gnarled trees still alive after 2,000 years. To the remains of a medieval village laid waste by a notorious pirate. And to faded neoclassical houses in a lively, colourful port that was briefly the capital of Greece.

That’s Aegina, once described as the most beautiful Greek island you haven’t heard of.  Time to change that!  It’s a great place for tourists to discover.  More than 20 beaches, gorgeous, warm blue sea, water sports, a water park, lively resorts, traditional villages, great food and friendly people are among the many attractions.

At its heart is a towering volcanic mountain where it’s said a god once prayed for rain. The Mount Oros area is now protected as one of the most historic and beautiful landscapes in Greece.

Long ago, Aegina Town, the main port, was one of the wealthiest towns in Greece. Now it’s authentically Greek, bustling narrow lanes, small shops and tavernas, a harbour crowded with colourful boats, horse and carriage rides along the waterfront and a single column from an ancient temple to Apollo, god of many things including music and healing.

Small beaches are tucked away along the north coast until you get to Souvala, a fishing village that has developed into a lovely, laid-back holiday resort. Busy, stylish Agia Marina, on the east coast, has Aegina’s longest sandy beach, with sunshades, sunbeds, water sports and cafes.

Not far away is a well-preserved temple to the goddess Aphaia, built more than 2,500 years ago. Its 28 marble columns still gleam in the sun – an impressive spectacle.

The picturesque west coast road hugs the coastline on the side of the island that enjoys the most spectacular sunsets. The road sweeps past several golden sand beaches, including two at Marathonas and the curved bay of Aiginitissa which is fringed with huge eucalyptus trees. Then on to the traditional fishing village of Perdika that is well known for its fish restaurants.

So much to see and do on an island you may not have heard of – until now.

It’s the Greek name for pistachio nuts and Aegina goes nuts over pistachios. It’s the main business on the island. Pistachio orchards cover substantial areas and the nuts are roasted, salted, put into nougat, sweets and pastries and sold all over Greece. Pistachio nut stalls can be found on seafronts and harbours. There is even a four-day Fistiki Festival in September with parades, exhibitions, displays and, of course, loads of nuts.

How do you say Aegina?

A good question that produces a number of different answers on Google. Take your pick from e-yee-nah, iy-he-naa, e-ji-nah and egg-ee-nah! It’s sometimes spelt as Egina so that may be the best way to say it. The name comes from the long-lost time of myths when Aegina was the beautiful daughter of a river god and water nymph.  Zeus, king of the gods, fell in love with her and took her to an uninhabited island. She had his son who became the first king of the island that was given his mother’s name.

How do visitors get to Aegina, an island without an airport?

By plane, taxi and ferry.  Taxis take guests from Athens airport to Piraeus, the spectacular and most historic port in Greece. The ferry heads off into the Saronic Gulf, loops around the north-west corner of the island and into the bustling port of Aegina Town.  The voyage takes about 40 minutes. Taxis will be waiting to take guests to their accommodation. 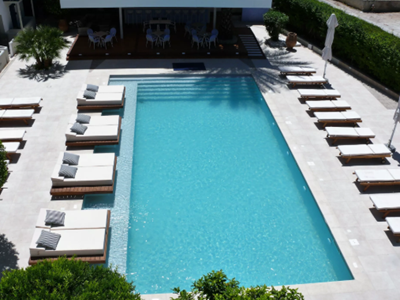 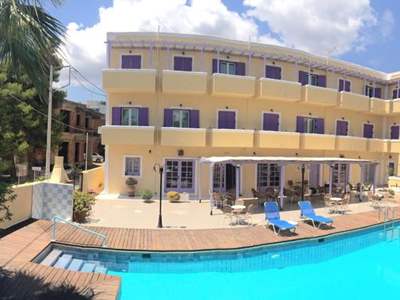 Summers are lovely on Aegina. Plenty of sunshine, a gentle breeze and a really warm sea.  The average temperature between June and September is 23 degrees Centigrade and in July and August the thermometer can top 30 degrees.

The temperature of the beautiful blue waters of the Saronic Gulf is comfortably above 20 degrees between June and September and can be as high as a delightful 26 degrees.  No wonder water sports are popular, especially sub-aqua diving. Families with young children enjoy some of the sandy beaches where the sea starts off being nicely shallow.

Most of the rain falls on Aegina between November and February and rainy days are few and far between in the summer months.

On July 16 and 17 the resort of Agia Marina celebrates its saint day with a procession, food, drink, music and fireworks. The church is on the beach and the festival is enjoyed by visitors.

One of the island’s main events is an international classical music festival in August. The 15th annual festival will be held in 2020.

And every summer the island hosts a popular three-day beach volleyball tournament that attracts some of the country’s top players. Evening entertainment is provided for spectators and players.

This triangular shaped island is only nine miles long and six miles wide at most, but there’s a great deal to see. There are roads good enough for buses on the north and west coasts but some visitors choose to hire vehicles so they can discover more secluded beaches, explore the vineyards and orchards and take the narrow, twisting roads into the volcanic mountains in the rugged south-east.

Car hire:  There are rental businesses for cars, scooters and bikes in Aegina Town and the resort of Agia Marina.

Buses: The main bus station is near the port in Aegina Town. Regular services run on three routes. One crosses the island to the resort of Agia Marina, another goes to the north coast resort of Souvala and the third follows the west coast to the small town of Perdika.

Taxis: There are plenty of taxis which tend to congregate at a rank near the port They can be booked by phone and will go to towns and villages across the island. Discuss the fare before the journey begins.

Horse carriages:  Take a 20-minute tour of Aegina Town’s picturesque waterfront in a horse and carriage. The colourful buggies hold up to four people. Find them on a carriage rank at the port.