Pelion Peninsula at a glance

Tucked away in the Pagasetic Gulf in eastern Greece, the Pelion peninsula is characterised by sweeping mountain vistas, enchanting villages and hideaway beaches.

Named after Mount Pelion, which majestically overlooks the peninsula, this locality is all about lush local charm and the splendour of the winding coastline. A relatively untouched part of Greece, this is a region in which to embark on magical forest hikes to discover monasteries and wonderful waterfalls, or meander through chocolate-box villages surrounded by olive groves, such as Makrinitsa and Milies. The Pelion Steam Train is a great way to soak up the scenery while letting the train do the work. During the warmer months, visit the beaches at Agios Ioannis and Mylopotamos – or discover your own secluded stretch of coastline for a swim.

The vibe of a Pelion peninsula holiday is about the beauty of nature. For those who want a little urban buzz too, a visit to the small city of Volos is fabulous for a little shopping, waterfront eateries and day trips to tiny neighbouring islands. Elsewhere in the Pelion peninsula, discover seaside tavernas serving authentic cuisine amid a rustic atmosphere, or experience wines in local vineyards, where the vines have been nurtured by the one-of-a-kind mountain climate. And for those who enjoy the quirkier things in life, the Pelion peninsula has a Museum of Worry Beads in Portaria!

Where to stay in Pelion Peninsula 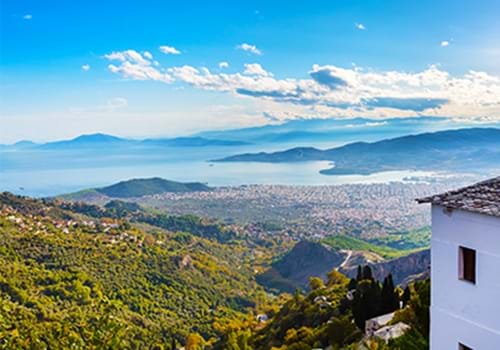 The charm of Agria village lies in its mellow seaside vibe and scattering of meze eateries with pristine sea views. 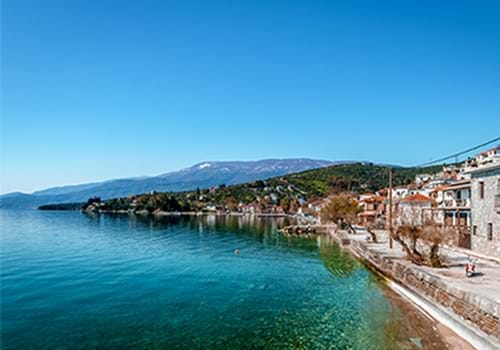 A large seaside village with a vibrant yet traditional atmosphere, Afissos is a brilliant holiday spot to blend activity with laid-back Greek living. 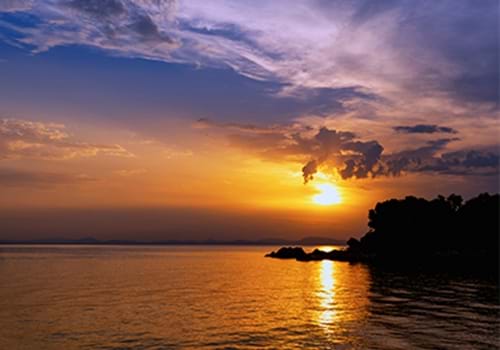 A quaint seaside village with a population of just 150, Chorto is a tranquil getaway location that really allows you to get into the rhythm of Greek life. 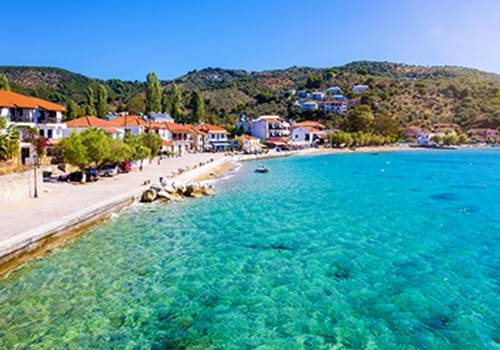 The views out to sea are simply spectacular, and a small but perfect stretch of sandy beach is a local hub for socialising or relaxing.

Agios Georgios: A village with simply stunning views over the western coast, and across the Pagasitikos Gulf, there is also a church housing an ecclesiastical museum, the Taxiarchon convent and an art museum.

Argalasti: centrally positioned, Argalasti has good access to both sides of Pelion. It also offers a variety of shops, restaurants and bars.

Kissos: hidden in the mountains, Kissos means 'ivy'. In the village square is an old church renowned for its frescos.

Makrinitsa: A pretty, traffic-free village, also known as the Balcony of Pelion for its position on the mountainside with breathtaking, panoramic views overlooking the city of Volos and the Pagasitikos Gulf. The city was originally founded by Greek refugees fleeing Constantinople in the 13th century.

Meteora: North of the Pelion peninsula, but well worth making the journey, this is a breathtaking example of a complex of Eastern Greek Orthodox monasteries. Its name means 'suspended.' This reflects the fact that the six monasteries are built on natural sandstone rock pillars, seemingly defying the laws of physics, not to mention the impracticalities of construction. It is at the northwestern edge of the Plain of Thessaly, near the Pineios river and Pindus Mountains of Central mainland Greece. It has inspired and been filmed for many films, music and literature.

Milies: The name means 'apple trees', surrounded as it is, by apple and chestnut orchards to the north east, and olive groves to the south west. It is the end of the line for a narrow gauge railway line built in late 19th century. The train still runs for tourists today, to the village of Lehonia. There is a small museum of local crafts, and a beautiful church.

Mouresi: Village of flowers. From here, stunning views of the sea and mountains can be enjoyed. The main square is dominated by a tall linden tree. The church of the Dormition of Virgin Mary is a prime example of basilica, decorated with a wooden carved iconostasis.

Tsagarada: Located on the north-eastern side of the mountain at 500 metres, it commands an unforgettable view of the Aegean. The names means 'beautiful view' in Slavonic. The village extends down the slope to the seashore where small but beautiful beaches are to be found.

Vizitsa: This village has many excellent examples of traditional Pelion architecture. Spend a day wandering through the narrow streets sampling traditional Greek food at the tavernas.

Zagora: At the northernmost part of Pelion, the village's Slavonic name means 'behind the mountain'. It is one of the largest of Pelion's mountain villages and is surrounded by orchards fed by natural springs. Its apples have a special aroma and are exported in large quantities. Zagora was once the capital of Pelion and the centre for Greek enlightenment, famous for its contribution to learning, art, education and trade. A small 18th century library is in the central square where over 3000 maps and manuscripts dating back to 17th century can be found.

Pelion is where the Greeks themselves come for a weekend to unwind and be close to nature. It is Greece as she used to be, as yet untouched by mass tourism and commercialization and unaffected by foreign influence. The peacefulness and majestic beauty can't fail to enchant, and will bestow a sense of calm and tranquillity on all who visit.

For walking or mountain biking holidays, central Pelion, overflowing with natural beauty is the place to go. The hillsides are densely wooded with pine and fir, chestnut and oak among which clear springs burst out from underground - there is an ever-present shush of flowing water. Old mule tracks make useful guide paths among the forests and fruit orchards, and the views from the perilously winding mountain roads down to the coast are spectacular. It is a paradise for nature lovers and ornithologists with many unusual species to spot.

In the mountains of central Pelion you will really get a feel of the authentic Greek way of life when you visit some of the hamlets accessible via narrow and twisting mountain roads. It's worth the jangled nerves from negotiating the bends for the arresting panoramic views and the delightful little towns where tavernas serve delicious traditional fare.

With the sea never too far away, the area offers up many a secluded, peaceful beach where lazy days can be spent enjoying the sunshine. On the northeast side, the seas can be stormy, but when calm, the waters are clear and clean, perfect for a refreshing dip.

When you're ready to take things up tempo, the region's capital city, Volos, is the fourth largest city in Greece. Situated in the bay of the Pagasitikos Gulf, the sheltered waters serve a thriving commercial port rivalled only by Piraeus and Patras, from where ferries leave for the nearby islands of the Sporades and one or two others. A wide boulevard skirts the bay, and is alive with cafes, restaurants and traditional tavernas. Volos enjoys all the amenities of any large town, including a colourful nightlife in its clubs and bars, theatres and cinemas.

Buses: There is a bus route between most villages in the Pelion peninsula and the city of Volos, making it possible to visit most places by bus. Check the KTEL VOLOU website for routes and times.

Car rental: Given the more rural nature of the Pelion peninsula, hiring a car can be an excellent way to explore and make your own discoveries, both along the coastline and on the mountainside. It’s best to hire a car either on arrival at the airport, or from a car rental office in Volos.