The Antalya Area at a glance

The Antalya region of Turkey, located on the Mediterranean coast of south western Turkey offers that perfect combination of pristine sandy beaches that slope gently into clear turquoise waters, great nightlife, natural beauty due to its location surrounded by olive groves and backed by the imposing pine clad Taurus mountains and a vast array of historical treasures waiting to be explored just a short excursion away. In fact such a rich combination is very rarely found elsewhere.
Antalya City itself still preserves its historical importance as the region's centre and with its palm tree-lined boulevards, internationally-acclaimed marina and old castle with traditional architecture it has an abundance of shops, bars and restaurants to explore.

Who holidays in Antalya?

Antalya holidays are perfect for those in search of sea, sun, history and nature. All of these keys elements blend seamlessly to form a collection of very popular resorts that are home to some of the cleanest beaches in the Mediterranean.

Our top hotels in Antalya 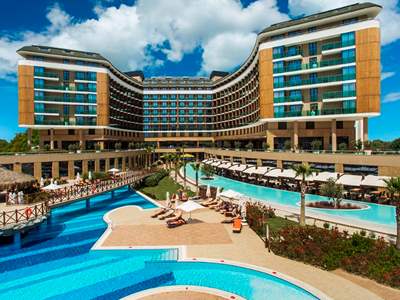 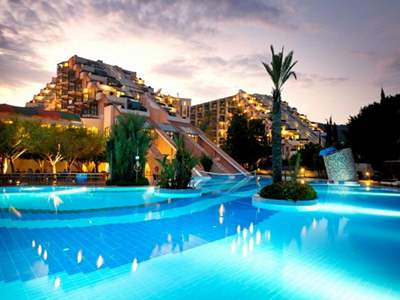 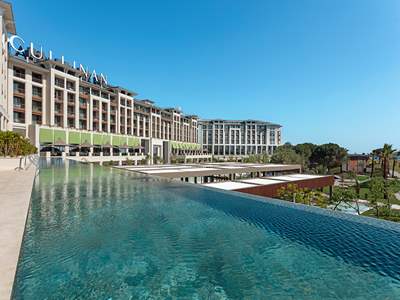 The Antalya region of the south west corner of Turkey is a 400-mile sweep of white-sand beaches and secluded coves backed by the majestic pine-clad Taurus Mountain range and over time the natural beauty of the region has been enhanced by the development of some of Turkey's most upmarket resorts.

The charming resort of Side is where old and new meet with stunning results. Walking the narrow alleyways of this fascinating resort , steeped in history where there seems to be an archaeological sight around every corner is a delight. With a great beach and wide choice of bar and restaurants, Side also has a vibrant and sophisticated nightlife.
Situated between Side and Antalya City the resort of Belek is home to some of the best hotels in the region and its long ribbon of sandy beach make it the perfect place to spend sun filled days. Belek is also home to a number of world class golf courses.

Located just 12 kms east of the cosmopolitan capital of the region, Antalya City is Lara Beach which has a sandy beach and some of the region's most stylish hotels.

Side: The beach is, of course, one of Side's main attractions, and it is hard to rival the quality of the sand or the length of the beach giving plenty of space to sunbathe - even in high season.

Belek: Most of the forests, thick with pine and eucalyptus, stretch down to a marvellous and almost limitless beach of golden sand. Belek's beaches are also amongst the best in the world for the laying of eggs for aquatic turtles (Caretta caretta).

Kumluca: and the many coves between Antalya City and Finike are home to some of the other most famous resorts and beaches in Turkey such as Kemer, Camyuva, Belek, Cirali and Adrasan. Closer to Antalya City, Konyaalti is 3 kms west of the city and Lara beach is 12 kms east and well connected by dolmus.

Shopping in Antalya City can be an exhausting yet exhilarating experience with everything up for grabs from the famous local jams and jellies made from a variety of fruits and vegetables, to antique jewellery, kelims, prayer rugs, leather ware, cotton clothing, traditional pottery and wood carvings. Haggling is expected and bargains are there to be had. The best shopping is in the Kaleici district near the city walls, along winding side streets in the old quarter.

The Olympos: The Olympos forms part of the Bey Mountains National Park which is located in the province of Antalya and contains a wealth of flora and fauna, as well as important archaeological ruins.

Golf in Belek: In recent years Turkey and Belek in particular has become an elite golf centre where golf players from around the world meet and participate in a round or two on some of the most immaculately kept courses imaginable.

Waterfalls: An excursion to Kursunlu waterfalls makes a refreshing change from the heat of the beach, and the Manavgat waterfalls and river are also close by and well worth a visit.

Visit Side: With its ancient harbour and whose name means pomegranate, Side is located on a pretty peninsula and has numerous important archaeological ruins.

Aspendos: See the theatre of Aspendos, one of the best preserved of the ancient world and which is still used for performances.

Belek Golf: Golf lovers will certainly enjoy a holiday in Turkey close to the golf resorts of Belek. Golfers from around the world are drawn to Belek's immaculate golf courses. In fact many golf tournaments and corporate events are held here throughout the year, due partly to the quality of its golf courses but also because of the fantastic weather and all the other factors that make this part of Turkey such a fantastic tourism destination.

Antalya Museum: Founded in 1922 by Süleyman Fikri Erten and housed first in the Alaaddin Mosque in the old city and then in the Yivli Minaret, the museum was later moved to its current location in Antalya City. The museum consists of 12 exhibit rooms as well as gardens and open galleries. In these halls the history of Antalya is given in a chronological and informative fashion starting with the first humans and continuing without interruption to the modern era.

Side: The ancient city of Side, 48 kms East of Antalya City, is most famous for its theatre, probably the best preserved in Asia Minor. It is still in use today, and stages the annual Aspendos Opera and Ballet Festival every summer. It was also the scene of a huge bloody battle between the Persians and the Greeks in 469 BC, and then ruled by the Spartans 120 years later. The city became part of the Seleucid kingdom after the death of Alexander the Great, and then became part of the Roman province of Asia in 133 BC. The view of the Temples of Apollo and Athena at sunset encapsulate all that is magical about this region.

The City Walls: What remains today of the city walls at Antalya City are a few bastions inside the city as well as Hadrian's Gate and its towers, the large tower facing the harbour and a few pieces of the harbour walls. One of the walls surrounds the yacht harbour and the other the city, almost like a horseshoe. One of the remaining towers in the Castle Gate Square is now used as a clock tower. There are four gates in the city walls, which form entrances to the city.

Boat: There are many types of cruises that link all the resorts and villages in the area. Take a Gullet cruise or a Blue Voyage cruise to explore Antalya and the surrounding areas.

Bus: The local bus (known as Dolmus) is normally a white mini bus that travels around the resorts. There are no specified bus stops, so to stop the Dolmus just flag one down.

Taxi: There are numerous taxis in all towns and resorts which are recognisable by their chequered black and yellow bands.

Car: Car hire and Jeep hire is available from our representatives. 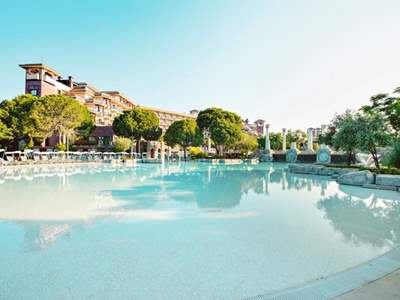 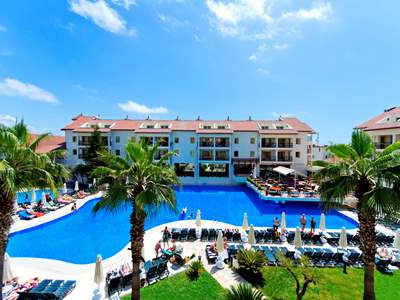