Tilos at a glance

It’s a tiny island, but Tilos has earned a big reputation for the good things in life. Like many other small Dodecanese Islands it promises a relaxing taste of traditional Greek life. But tranquil Tilos is also Greek’s greenest island – and the last place in Europe where elephants once lived!

Six-mile long Tilos and its 16 Aegean Sea islets are an internationally recognised ecological park. That’s a great plus for visitors to this sunny place full of flowers midway between Rhodes and Kos.

The mountains, forests, meadows and beaches provide safe homes for hundreds of plants, birds and other wildlife such as turtles and seals.  Many species are rare, some are under threat, and volunteers work to protect them.

A network of well-trodden paths enables walkers to explore the countryside that stays green all year because of a network of fresh-water springs.  In another bold ecological-venture, Tilos is striving to become exclusively powered by wind and solar energy.

So what else does this small, special place offer? Numerous beaches, including lovely, sandy Eristos, pretty Plaka cove beside a peacock park, and Livadia, where tamarisk trees and a traffic-free promenade line a long pebble beach. Explore them by bus, bike, boat or hire car.

Despite being the main port, Livadia is a small, laid-back town with a tree-lined main square and some lovely tavernas.  The capital, Megalo Horio, is a charming flower-decked town of cobblestoned alleys, tiny courtyards and friendly people - and not to be confused with Micro Horio. That’s an abandoned village that still contains the remains of a medieval castle and church.

What about those elephants? Dwarf elephant bones found in a cave are believed to be from animals that survived when the land that is now Tilos parted from the mainland six million years ago.

Where to stay in Tilos 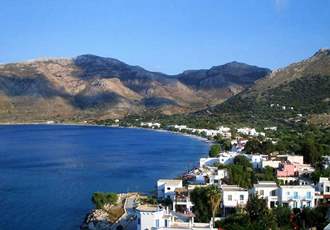 Scenically attractive, and exceptionally warm and welcoming, Livadia will provide a holiday in its traditional sense. 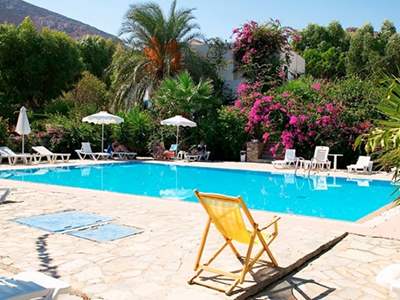 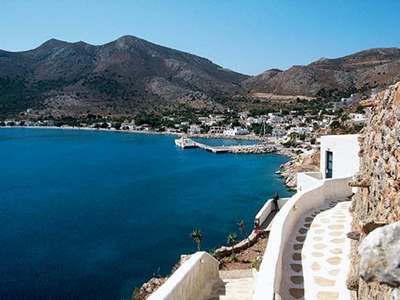 Tilos makes a wonderful summer destination and, as if you need an excuse to indulge in delicious food and wine, there are sound cultural grounds for heading there at the end of July. The abandoned 15thcentury monastery of Agios Panteleimonas, overlooking the sea, hosts a three-day festival, including music and dancing. Of course, you’ll admire the historic frescoes, too.

Bus With the first bus leaving Livadia at 8am, there are seven island end-to-end trips per day, the final return departure from Megalo Horio at 10.15pm. On Sundays is a special excursion to Moni Agiou Panteleimonos (monastery), allowing one hour to look around. In summer there are excursions to hidden beaches.

Cars can be rented for your holiday, but bear in mind there are not that many roads to make it worthwhile.

Ferry There are regular ferries to the island of Rhodes as well as other of the Dodecanese islands, and also to the mainland port of Piraeus.

Hike or Bike The best way to enjoy the beauty of Tilos is by scooter hire.